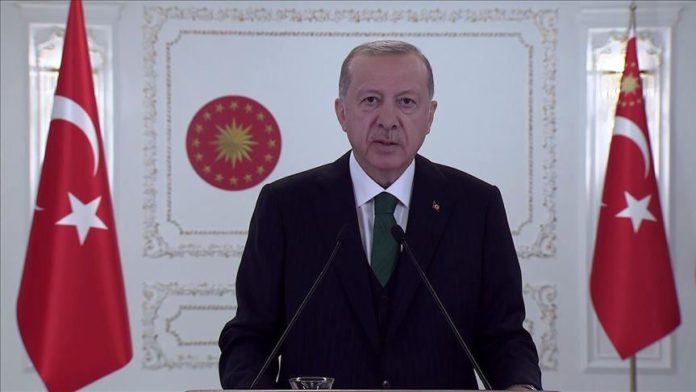 The Turkish president on Thursday said his country has zero-tolerance for violence against women, marking the 25th anniversary of the Fourth World Conference on Women.

“We fight violence against women with a multifaceted, holistic approach and with the principle of zero tolerance,” Recep Tayyip Erdogan said in an over 4-minute-long video message.

2020 marks 25 years to the conference in the Chinese capital, which passed the Beijing Declaration and Platform for Action. It set a path-breaking agenda for women’s rights and gender equality.

“We can never tolerate even a single woman in our country being exposed to violence, incurring the violation of her rights, law, and dignity,” Erdogan said.

“Even 25 years after its adoption, the Beijing declaration remains a milestone for the rights of women and girls. We attach great importance to the review process of the declaration at the local, regional, and global levels.”

He said the world falls far behind what was committed in 1995.

“From this day on, it is clear that more needs to be done,” he said.

“In Turkey, in recent years, we have taken historic steps to strengthen the role of women in life, based on the principle of “strong women, strong family, strong society.”

The president said Turkey provided more educational opportunities to women and encouraged their participation in the labor force.

In recent years, he said, the female workforce in the country increased by nearly four million and crossed 10.6 million, while female employment rose by nearly three million to reach 8.9 million.

“Also during this period, the female labor force participation rate increased by 6.5% to reach 34.4%,” Erdogan said.

The head of state said Turkey appreciates that one of the priorities determined by Volkan Bozkir, a Turkish diplomat elected as president of the 75th UNGA session, for this year’s assembly is “improving the living standards and the rights of women, ensuring their full and equal participation in all spheres of life and strengthening their status within society.”

“We will continue to provide all the necessary support to Mr. Bozkir in this meaningful work,” he said.

Erdogan pointed out that the COVID-19 pandemic has shown “how fragile women’s rights are, even after 25 years [of the Beijing declaration].”

In many countries, violence against women has escalated, and thus the socio-economic burden on their shoulders has increased, he said.

“In Turkey, taking into account the possibility of escalation of domestic violence [during the virus outbreak due to restrictions], we have opened new guesthouses for women, and thus further strengthened our capacity to protect victims in the face of deplorable incidents,” he said.

Besides, Erdogan said the government has implemented employment measures, and women-friendly policies.

“Through the social support helpline, and a specially developed mobile application, we have ensured that cases of violence and abuse are immediately reported to the relevant units,” the president said.

“It is the responsibility of all of us to make sure women come out stronger.”