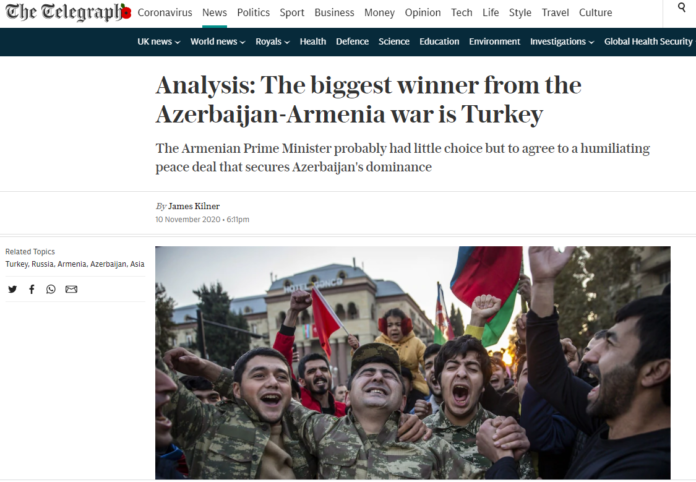 Russia may have secured a peace deal to end the conflict between Azerbaijan and Armenia over Karabakh but “Turkey has won the war”, according to an analysis by a British daily.

“Strong Turkish political support, cutting-edge Turkish drones and experienced Turkish military advice skewed the balance towards Azerbaijan,” in the conflict, an article by The Telegraph said.

Turkish support also “allowed it to roll over Armenian positions in what was considered to be the near-impregnable mountain fortress of Nagorno-Karabakh.”

The article — The biggest winner from the Azerbaijan-Armenia war is Turkey — said after Azerbaijani forces captured the town of Shusha, the second biggest city in the conflict zone, “it was clear that Azerbaijan had scored major military successes.”

The article argued that Armenian Prime Minister Nikol Pashinyan had little choice but to agree to a “humiliating peace deal” which secures Azerbaijan’s dominance and forces his soldiers to leave the surrounding area.

It said sporadic fighting continued between Azerbaijan and Armenia since a 1994 truce in the region but Azerbaijan’s success in the past six weeks was “impressive”.

“The difference has been Turkey and now it will reap the political rewards.”

Turkey has forces “in neighbouring Syria and in Libya and now wields major influence in the South Caucasus,” the article continued.

The daily described Armenia and Pashinyan as “the big losers”.

It said: “The idea of an out-gunned but plucky Armenian army defending Nagorno-Karabakh from Azerbaijan is central to modern Armenia.

“For Pashinyan to lose control of the region only two years after he was propelled into power in a revolution will probably cut short his political career.”

Also arguing that Russia has “limited room for manoeuvre in the South Caucasus”, the article said the country “needs Turkey’s support, even in the background, to impose stability.”

It also noted: “The Kremlin tried twice to impose ceasefires but both collapsed. Only now, when the war was nearing a conclusion and several thousand people had been killed, was the Kremlin able to get a peace deal across the line.”

“The price has been to commit 2,000 Russian soldiers as peacekeepers.”

The Telegraph piece also reminded a “US-negotiated ceasefire collapsed almost as soon as the ink was dry on the paperwork.”

“Distracted by the coronavirus, terrorist attacks and a presidential election in the US, the West has missed the significance of war in this former Soviet backwater.”

Besides other towns and villages, Baku’s liberation of the strategic city of Shusha on Sunday had signaled that the victory was imminent.

'My mother faces humiliation and torture in custody'

Zambia on course to launch satellite in 2023