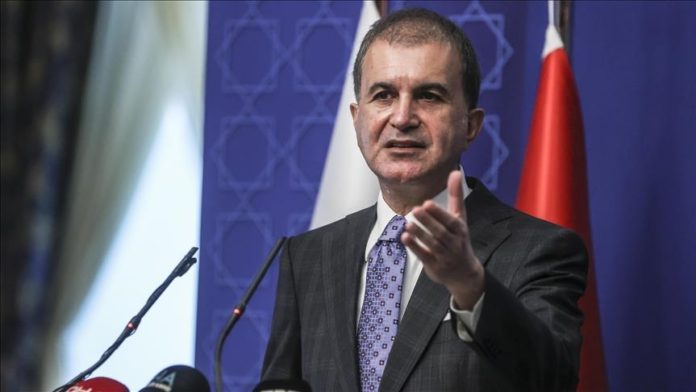 Turkey has a limit to the burden it will carry on migration, according to a statement by the spokesman for Turkey’s Justice and Development (AK) Party.

Omer Celik criticized the European Union at a news conference late Monday for “reducing the issue of migration to merely financial aid,” which he viewed as “a lack of vision, unsustainable in the long run, a grave mistake.”

He said the aid will be provided to Syrian refugees, not Turkey, and the EU desires to protect Europe from migration and its negative effects through the funds.

“Turkey bears this burden, but there is a limit to Turkey’s bearing this burden. Therefore, the determination of close cooperation should not be reduced to financial issues only, but should be viewed from a broader perspective,” he said.

Celik reiterated that Greece violated the 1988 Athens Memorandum of Understanding by declaring drilling zones on the Aegean Sea during the summer tourism season, a period not allowed by the deal.

He said the attitude Greece adopted is against the deal as well as discussions between Turkish President Recep Tayyip Erdogan and Greek Prime Minister Kyriakos Mitsotakis.

“As a result of Greece’s tendency to maintain the policy of tension, Turkey issued a Navtex,” said Celik. “Turkey has no choice but to issue a Navtex.”

“The whole world must see that tensions originate in Greece,” he added.

Celik said decisions about Cyprus at last week’s EU summit did not present a fair attitude.

“The EU failed to see the realities on the island once more, as seen in the summit decisions. We emphasize once again that the EU needs to see the truth on the island, and that there is a state and society that shares equal status with the Greek Cypriots, as the TRNC (Turkish Republic of Northern Cyprus),” he said.

He went on to say that the 2016 migration agreement between Turkey and the bloc should be addressed in all aspects rather than partial approaches.

Concerning Turkey’s negotiations on the Kabul Airport mission in Afghanistan, Celik said a legal basis should be established with the Afghan government.

“This (the negotiations) is also an expression of our support for the establishment of Afghanistan’s unity and for the Afghan people to have an honorable and free future,” he said.

“All of these are important elements for our national security. The continuation of our support to the Afghan people with the same strength is extremely important for our historical relations,” he added.

Noting that the project is called a think-tank, he said the group defined its mission as fighting the “dictatorship” in Turkey.

“We know from Bolton’s writings that he doesn’t have good feelings toward Turkey. But on the other hand, there are people close to the Fetullah Terrorist Organization involved in the project,” he said.

He stressed that Bush and Bolton’s former positions require them to be sensitive about staying away from such an organization.

“We find it extremely odd that these people, who have served in various offices in the US and held important positions, came together with members of the Fetullah Terrorist Organization, an anti-Turkey organization,” he said.

“It will certainly not be a ‘think tank’ project, as it will be a center of disinformation. We certainly do not want the people who have served in those duties to be in such a disinformation center.”

When Turkovac vaccine – now in a testing phase – is put into use, Turkey “will present it as good news for both our nation and all humanity, as our president said,” Celik said.

“Contrary to those who escalate tension and racism regarding vaccination, Turkey will show once again that it is a country of conscience, a country that appeals to the conscience of all humanity,” he said.

Panic as over 150 crocodiles on loose in South Africa