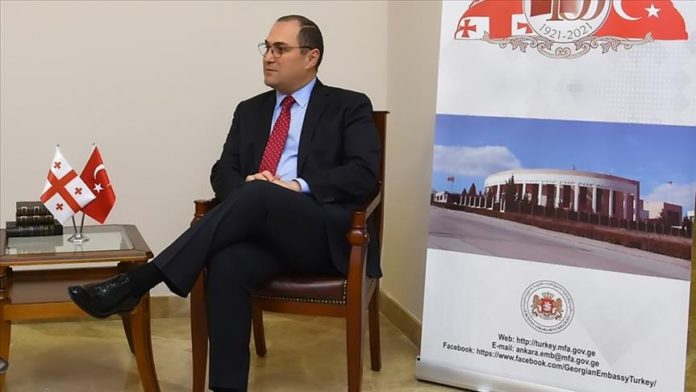 Turkey has been a friend and a strategic partner of Georgia and it has always supported the latter’s efforts to integrate with Euro-Atlantic institutions, the Georgian ambassador to Ankara said.

Marking the 100 years of the establishment of the Georgian Embassy in Turkey, George Janjgava commented on relations with Turkey in an interview with Anadolu Agency.

Janjgava said his country’s decision to establish diplomatic relations with Turkey dated back to 1921 when experienced politician Simon Mdivani — deputy chairman of the Constituent Assembly of the Democratic Republic of Georgia — was appointed the ambassador to Ankara.

He noted Mdivani was the first foreign ambassador to present the letter of credential to then head of the Turkish parliament Mustafa Kemal Ataturk.

Noting that the past century witnessed the development of relations between the countries, the Georgian envoy said Ankara has always been a supporter of his country.

He said Turkey, a “friend and strategic partner”, backs Georgia’s territorial integrity, sovereignty and its efforts to integrate with Euro-Atlantic institutions in all international platforms, adding the foundation of the high-level strategical cooperation council in 2016 was another milestone that took bilateral ties to the next level.

Janjgava further added that both sides cooperated in many fields — including energy, economy, trade, culture and education — with joint efforts by both governments that helped the realization of large-scale projects.

Noting that Turkey was one of the very first countries that recognized Georgia’s independence, he said diplomatic relations with Turkey and Georgia was founded on May 21, 1992.

Janjgava thanked the Turkish government for extending a helping hand to Georgia amid the COVID-19 pandemic.

Turkish citizens were allowed to travel to Georgia during the pandemic, which was another evidence of good relations between the two neighboring countries, the ambassador added.