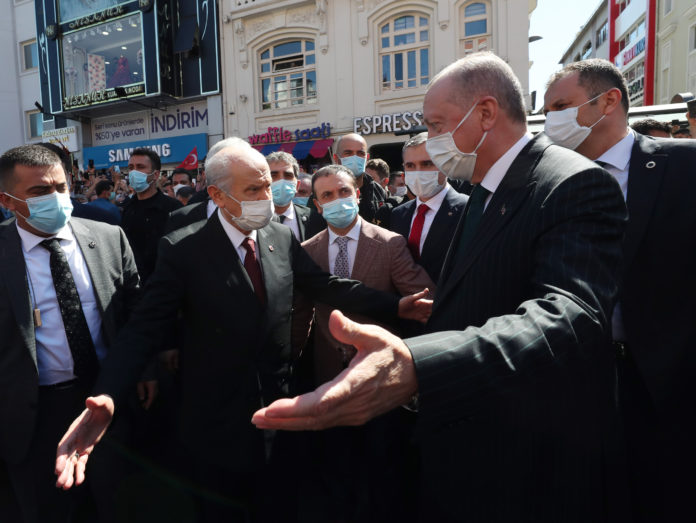 Before the Friday prayers, Turkish President Recep Tayyip Erdogan recited from the Quran inside the reopened mosque, choosing from both the Surah Al-Fatihah and the Surah Al-Baqarah.

During the visit to the tomb of the Hagia Sophia Mosque’s “owner,” Erdogan noted that restoring the landmark as a mosque had only been made possible after 86 years with the joint efforts of the People’s Alliance — comprising of his ruling Justice and Development (AK) Party and Bahceli’s MHP — and with the “judiciary now seeing the truth.”

“As a cultural heritage of all humanity, it [Hagia Sophia Mosque] is a place where people of all religions can come and visit,” Erdogan said.

He underlined that the monument now returned to its “roots” and would serve all believers.

“Now, this place has returned to its roots, it was a mosque and became a mosque again. Now, I hope it will continue to serve all believers forever as a mosque.”

Erdogan also added that specialists from the Culture and Tourism Ministry would conduct restoration efforts both inside the Hagia Sophia and in its surrounding area. 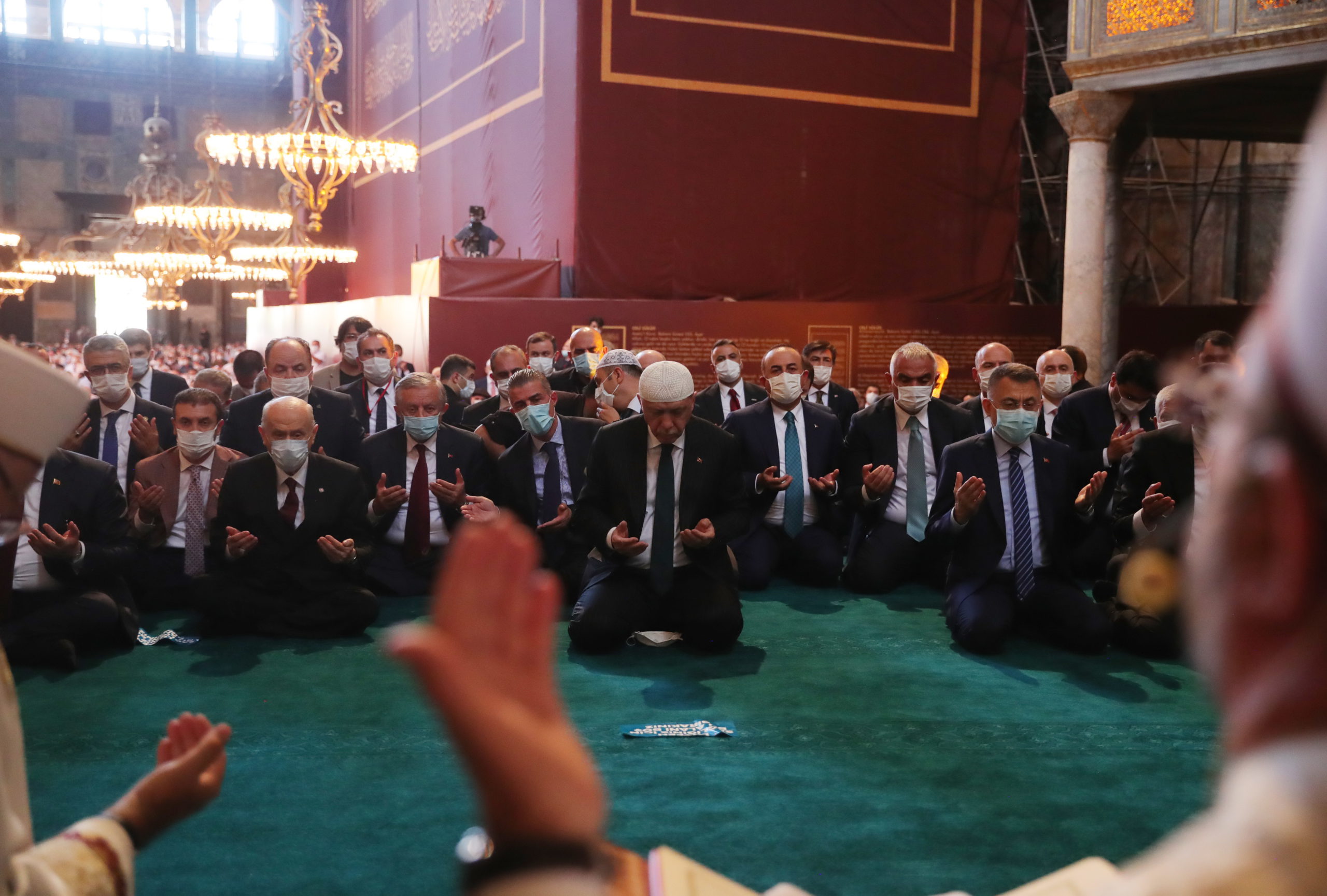 During the service, Ali Erbas, the head of Turkey’s Religious Affairs Directorate (Diyanet), read out a special khutbah, or sermon, before the collective prayer, titled as “Hagia Sophia: Sign of conquest, our trust in Fati̇h [Sultan Mehmet].”

Erbas said: “In this blessed time, together, we are witnessing a historical moment in this holy place.”

“Hagia Sophia Mosque regains its congregation today, the third day of the blessed Muslim month of Zulhijjah, in which the blessed Eid al-Adha, or Feast of the Sacrifice, is approaching us.

“The longing that turned into an open wound for the heirs of Fatih has now ended. Eternal praise be upon Allah the Almighty.

“Today is the day when takbirs [Allahu akbar], prayers, and salavats [salutation upon the prophet of Islam] resonate in the domes of Hagia Sophia, and the adhan – call for prayer –rises from its minarets.

“Today is a day similar to one 70 years ago, when 16 muezzins from the 16 minarets of Sultan Ahmet Mosque, located just opposite Hagia Sophia, joyfully filled the air with adhan, after an 18-year hiatus. 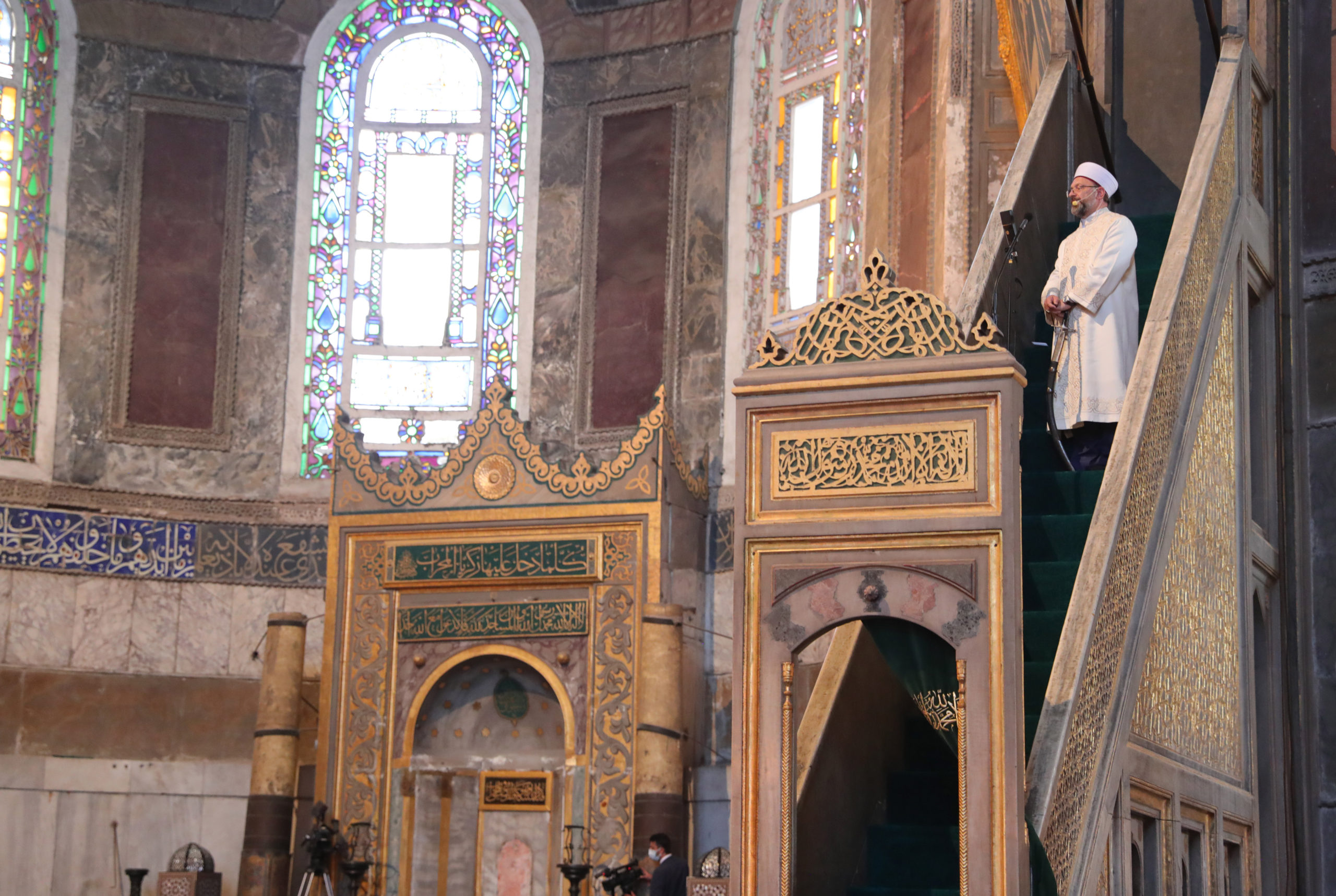 “Conquest is a revival, not an attack, and is reconstruction, not destruction.

“‘And when you have decided, then rely upon Allah. Indeed, Allah loves those who rely [upon Him],’ Quran, Surah Al Imran, verse 159.

“Ottoman Sultan Fatih Sultan Mehmet conquered Istanbul with the will and grace of Allah, and allowed not even a single stone of this cherished city to be damaged. 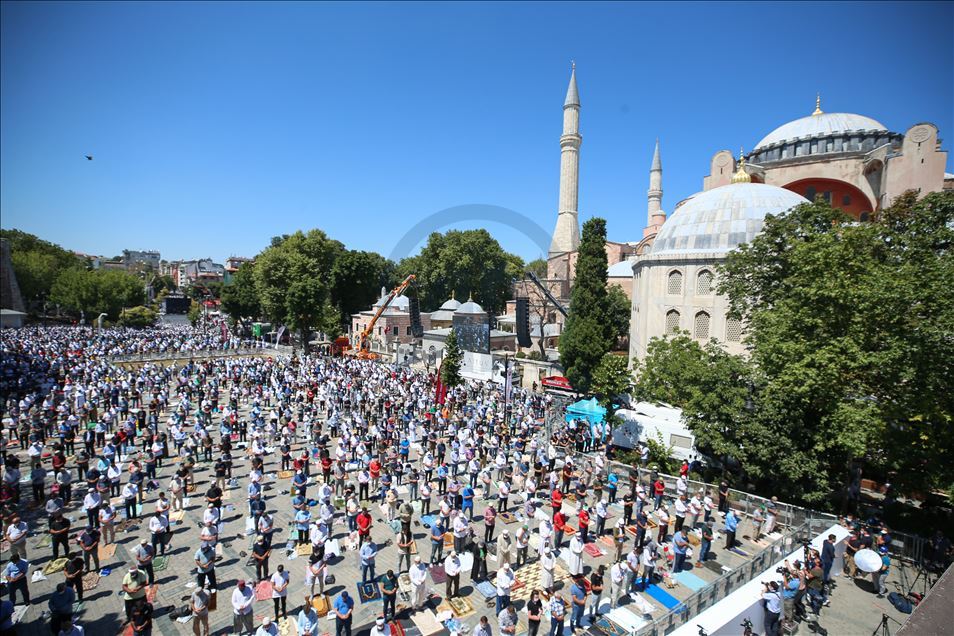 “Greetings upon the great famed [Turkish] architect Mimar Sinan, who adorned Hagia Sophia with minarets, strengthened the construction, and kept it standing tall for centuries.

“Greetings upon all our brothers and sisters who waited for the reopening of Hagia Sophia to worship in the four corners of the world, and celebrate its opening with joy.

“Greetings upon the elders who strived until this day to reunite Hagia Sophia with the adhan and prayers.

“With its life spanning more than 15 centuries, Hagia Sophia is one of the most distinguished sites in science, wisdom, and worship in human history.

“Sultan Mehmet the Conqueror dedicated this magnificent construction to believers to remain a mosque until the Day of Resurrection. 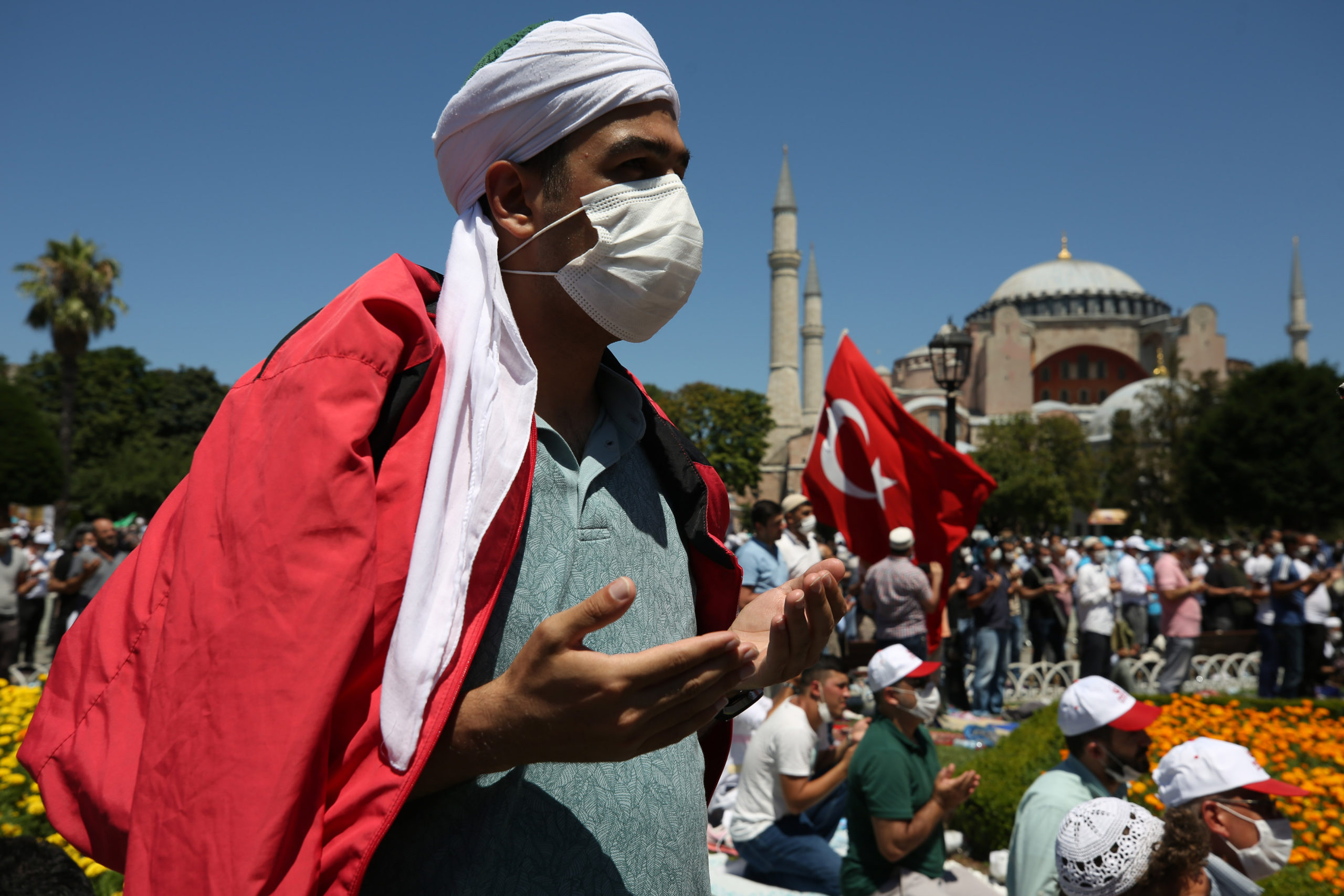 “In our belief, waqf, or foundation property, is inviolable, and the term of the devotee indispensable.

“Hagia Sophia is a place where Islam’s vast mercy is once again proclaimed to the world.

“After the conquest, Fatih told the people who take shelter in Hagia Sophia that they have nothing to fear.

“That is why Hagia Sophia is a symbol of respect for faith and moral coexistence.

“Opening Hagia Sophia up for worship is a requirement of fidelity to its historical roots. It is the transformation of a sacred place, which was used as a mosque for five centuries, back to its origin.

“Our mosques are the source of our unity, faith, and tranquility.

“Today, Muslims in various parts of the world are subjected to constant persecution, with mosques facing Islamophobic attacks, their doors locked, facing bombs or even destruction.

“I set forth the magnificent behavior of Fatih Sultan Mehmet in Hagia Sophia as an example to the world, and invite all humanity to say ‘stop’ in the face of anti-Islamic rhetoric, action, and cruelty.

“As believers, our greatest duty today is to work for mercy and tolerance, peace, tranquility and goodness to hold sway all over the world. Our duty is to work day and night so that goodness and justice always prevails on earth. Our duty is to be the guarantor of justice in regions beset by cruelty and injustice, tears and helplessness.

“We believe that earth is our common home. We believe that everyone in this home, regardless of belief, race, or color, has the right to live in safety, dignity, freedom, and humanity.

“Under the dome of Hagia Sophia, I invite all of humanity to embrace justice, peace, compassion, and equity. I urge you to foster universal values and moral principles that protect the honor of being a human being.

“Addressing the whole world, I would like to say that the doors of Hagia Sophia Mosque will be open to all the servants of Allah, just like the mosques of Suleymaniye, Selimiye, Sultan Ahmet [the Blue Mosque], and others.

“In the sacred atmosphere of Hagia Sophia Mosque, the journey to belief, worship, history and contemplation will, unabated, move forward.” 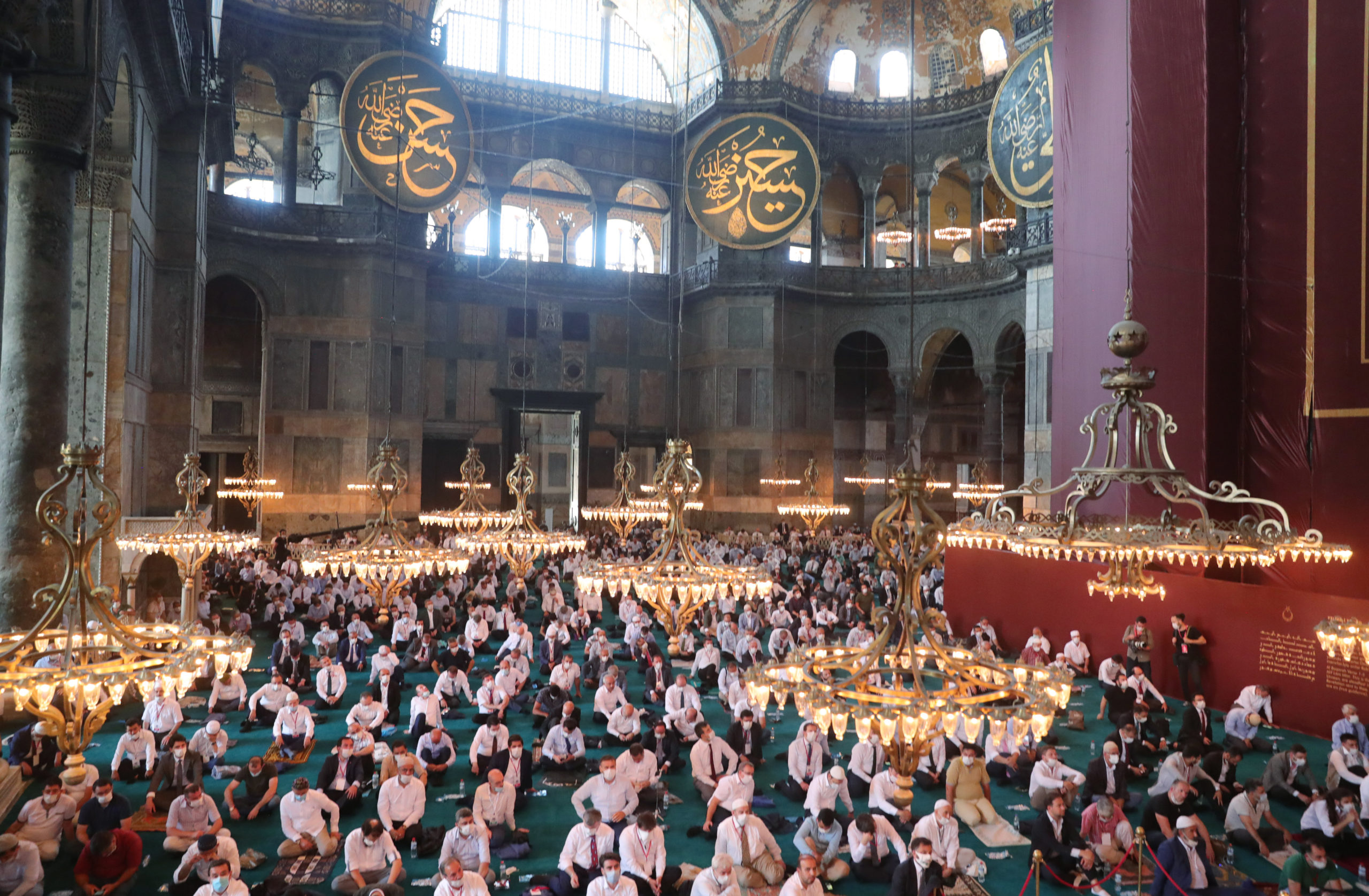 On July 19 a Turkish court annulled a 1934 Cabinet decree that turned Hagia Sophia into a museum, paving the way for its use as a mosque.