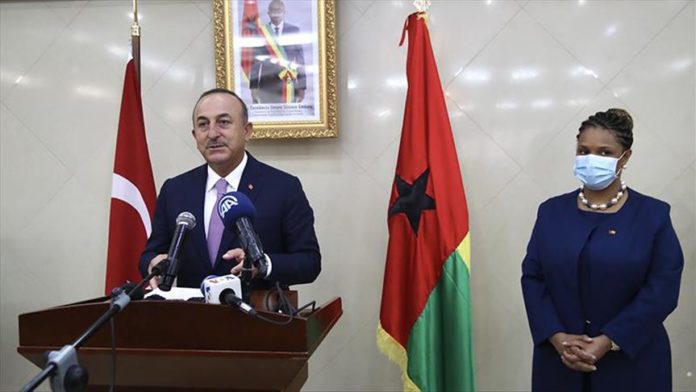 Turkey on Thursday signed an agreement on educational cooperation with the West African country of Guinea-Bissau, including an agreement to close schools linked to a putschist terrorist group.

“I would like to thank Guinea-Bissau for its support in the fight against the Fetullah Terrorist Organization [FETO], and we welcome the closure of FETO-affiliated schools here,” Turkish Foreign Minister Mevlut Cavusoglu, on day two of a three-nation West African tour, told a press conference.

Also hailing the signing of an agreement between Turkey’s Maarif Foundation and Guinea-Bissau, Cavusoglu stated the group will open new schools in the country, much like it has already opened 333 schools in 43 different countries, including 23 in Africa.

FETO, the terror group behind the 2016 defeated coup in Turkey, also has a network of schools abroad that it uses as cash cows.

Since the defeated coup, Turkey set up Maarif Foundation to transition former FETO schools to responsible administration as well as open new schools.

Turning to the coronavirus outbreak, Cavusoglu said: “We show solidarity with Guinea-Bissau during the pandemic and today we also brought with us ventilators and N95 [face] masks.”

Cavusoglu also said they will be supporting the establishment of a diplomacy academy in Guinea-Bissau and that the Turkish Foreign Ministry Academy will offer online training programs to local diplomats.

“We will continue encouraging our businesspeople to invest here in Guinea Bissau,” he added.

In Turkey, FETO and its US-based leader Gulen orchestrated the defeated coup on July 15, 2016, which left 251 people martyred and nearly 2,200 injured.

On his West African tour, after visiting Mali yesterday and then Guinea-Bissau, Cavusoglu will proceed to Senegal.

Cavusoglu and his delegation will address political transition in the country as well as bilateral relations and regional and international matters, said a ministry statement.