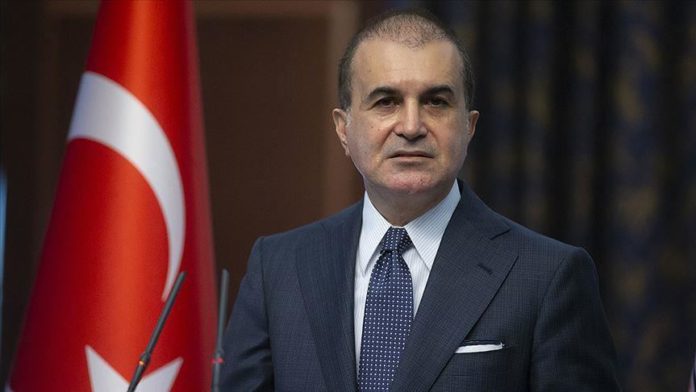 Justice and Development (AK) Party spokesman Omer Celik was referring to an Islamophobic act on Sunday, when a flag of the Byzantine Empire was hanged over a mosque in Southern Cyprus.

The act was widely criticized among Turkish and Turkish Cypriot officials, who demanded perpetrators to be found.

Also hitting back at recent remarks from Greece that Athens was ready for “military conflict with Turkey,” Celik warned of the dangers of “racists and fascists” in Europe.

Referring to remarks by Greek Defense Minister Nikolaos Panagiotopoulos on Athens’s “readiness for military conflict with Turkey,” Celik said: “Do not make such bad jokes, this type of joke will stick on your forehead.”

“Turkey is a state of law, not a tribal state. It does not have ministers speaking like it’s a tribal state,” Celik told reporters in the capital Ankara, adding that Turkey’s priority was to protect its rights and interests within the scope of the law, but underlined that the Turkish army was one of the world’s most powerful military forces.

“The Turkish Armed Forces’ determination and power to protect Turkey’s national interests is not up for discussion, and everyone knows it.”

Panagiotopoulos earlier claimed that Turkish jets “harassed” a helicopter in which he was riding.

“Any harassment of the helicopter carrying Greece’s national defense minister on board is out of the question,” said Turkish Foreign Ministry spokesman Hami Aksoy in a statement.

Aksoy went on to say that Turkish fighter aircraft merely performed a routine aircraft identification check over the Aegean.

“Dramatizing routine flights in a way that sows tension is not to Greece’s benefit,” he added.

“Instead, these issues should be taken up within the process of confidence-building measures launched between the defense ministries of both countries,” he urged.

Turkey brings back citizens from abroad

The pandemic has killed over 409,800 worldwide, with over 7.04 million confirmed cases and more than 3.15 million recoveries, according to figures compiled by US-based Johns Hopkins University.

Stressing that a total of 65 racist and anti-Islamic incidents had been reported in Europe this year until June, Celik said 38 of them had targeted Turkish mosques and associations.

Those who ignore fascists must eventually face them, Celik added.

Europe: Economic sentiment up in January