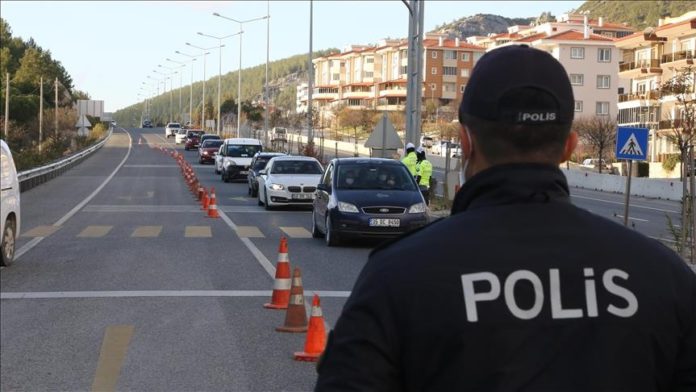 Turkey will start a nationwide curfew spanning the traditional New Year’s holiday starting Thursday until early Jan. 4 as part of measures to stem the spread of the novel coronavirus.

The curfew will begin on Thursday at 9 p.m. and end at 5 a.m. local time on Monday.

Turkey has been implementing curfew on weeknights and full weekend curfews since Dec. 5 amid measures to stem the outbreak.

Certain streets and squares will be closed during the four-day curfew, with the ban also covering foreign tourists.

Famous tourist destinations including Istiklal Street and Sultanahmet Square in Istanbul, the July 15 Kizilay National Will Square in the capital Ankara and Gundogan Square in the Aegean province Izmir, will be closed from 9 p.m. Dec. 31 until 10 a.m. Jan. 1

Hotels and accommodation facilities will also be barred from holding New Year’s Eve celebrations in a measure meant to avoid mass gatherings.

People will still be allowed to attend Friday prayers at their local mosque within walking distance.

As part of measures during the New Year holiday, security units will carry out controls at over 8,300 points, including from the air and sea, according to the Interior Ministry.

Security forces will deploy 113 airborne vehicles, including helicopters and drones, as well as 109 watercraft for these efforts.

Earlier, Turkey’s President Recep Tayyip Erdogan announced that in addition to ongoing public health measures, Turkey would impose a holiday curfew from 9 p.m. on Dec. 31 to 5 a.m. on Jan. 4.

“We have started to see the positive effects of the restrictions and other measures,” Erdogan said, underlining that this was thanks to “public sacrifice.”

As of Wednesday, Turkey registered a total of 20,642 deaths due to the coronavirus, while over 2.07 million people have recovered from the disease. Currently, there have been over 2.19 million confirmed cases in the country.

The virus has claimed more than 1.8 million lives in 191 countries and regions since first being detected in Wuhan, China last December, according to the US’ Johns Hopkins University.

Over 82.8 million people have been infected with the virus and more than 46.8 million have recovered from the disease.

*Writing and contribution by Seda Sevencan