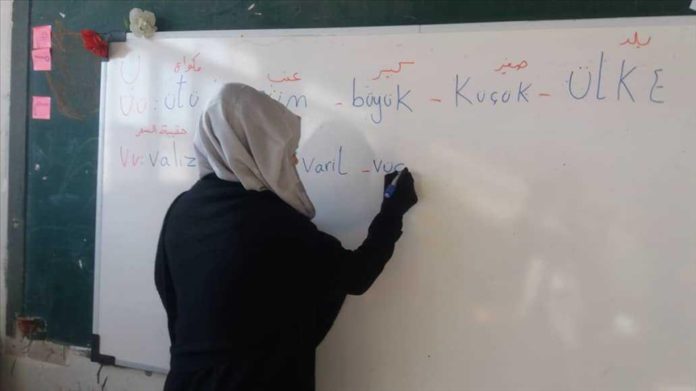 A total of 240 students who succeeded in courses in Omer Bin Hattap and Alibecliye mosques in the center of Tal Abyad were awarded gifts.

Children, who have been under the pressure of terror organizations for years and tried to detach their national and moral feelings, are excited to return to their education.

To boost peace and security of the district, many facilities such as schools and mosques are built with the help of Turkey’s armed forces and Turkish NGOs, which also distribute aid materials to residents of the war-weary region.

Ras al-Ayn was liberated from YPG/PKK terrorists Oct. 12, 2019, as part of Turkey’s Operation Peace Spring. It was launched to secure Turkey’s borders by eliminating the terror group from northern Syria, east of the Euphrates River, aid in the safe return of Syrian refugees and ensure Syria’s territorial integrity.

Terrorists, however, continue attacks in Ras al-Ayn and nearby Tal Abyad, despite their withdrawal from the border area following negotiations between the US and Turkey on Oct. 17, 2019.

In its more than 30-year terror campaign against Turkey, the PKK — listed as a terrorist organization by Turkey, the US, and EU — has been responsible for the deaths of nearly 40,000 people, including women, children and infants. The YPG is the PKK’s Syrian offshoot.