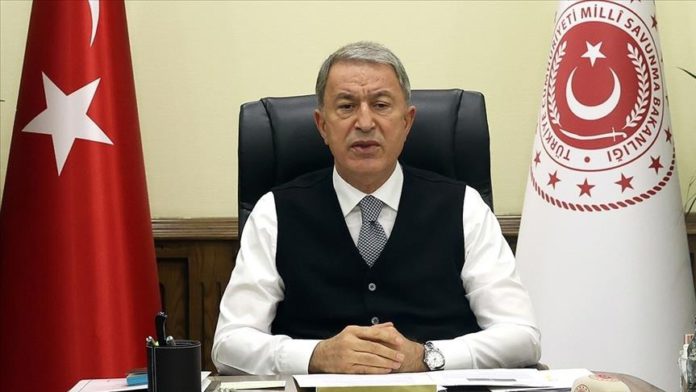 Akar’s remarks came a day after his meeting with German Defense Minister Annegret Kramp-Karrenbauer in Berlin.

Noting that the meeting with Kramp-Karrenbauer was “very constructive,” he said: “We have observed with great pleasure that we share similar opinions on many issues. I assess that some concrete steps will be taken especially in the fields of defense and security in the coming days as a result of this meeting.”

Akar added that Germany is among Turkey’s most important allies and partners in Europe’s security and politics, NATO, Organization for Security and Co-operation in Europe (OSCE), Council of Europe, and economic institutions.

“We expect that our works will lead to positive results soon. Taking into consideration the meetings between our president and Chancellor [Angela] Merkel, I assume that it will be possible to carry out more constructive, positive, and productive work,” he continued.

He went on to say that Turkey has fulfilled all of its responsibilities to date and will continue to do so.

“It is known to everyone that Turkey is one of the outstanding members of NATO in terms of unity, operations, drills, and financial support. Accordingly, our relations with NATO are very constructive and well-realized,” he said.

Akar also stated that negotiations with Greece on the Eastern Mediterranean and the Aegean are expected to be more productive in the coming days.

He said that a total of eight meetings has been held with Greece to date and that Turkey expects Greece to be more “involved” in the upcoming meetings.

“We hope to come up with peaceful solutions to the problems between Greece and Turkey through these negotiations. We want everyone to know that we are ready to make necessary contributions to resolve the issues,” Akar said.

Noting that Turkey with its research ships has so far done nothing except technical and scientific studies, Akar said: “We avoid any attitude and action that may negatively affect the relations between the two countries. On the other hand, we do have certain rights.”

Reminding all third parties to look at the issue objectively, the Turkish defense chief said, “We see that Germany has been as consistent as possible and principled. We hope that this approach will set an example for other EU and NATO countries.”