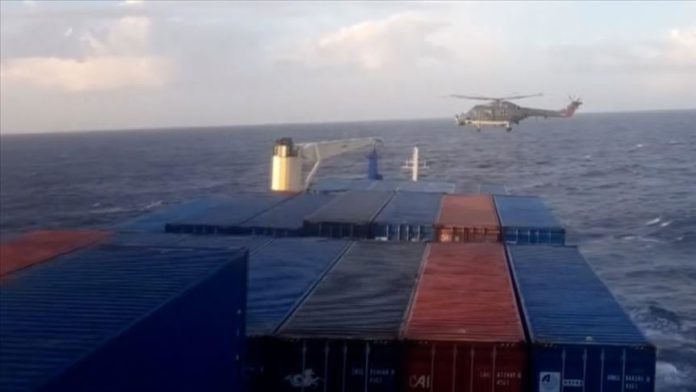 A German frigate that forcefully and unlawfully boarded a Turkey-flagged cargo vessel in the Eastern Mediterranean Sea did so without the consent of flag state and captain, Turkey’s National Defense Ministry said Tuesday.

In a written statement on the incident that took place on Nov. 22 off the Peloponnese islands, the ministry noted that UN Security Council resolution 2292 required consultations and permission from the Libyan government to search vessels as part of the UN arms embargo on Libya, where the Turkish cargo ship, Rosaline-A, was headed.

Despite this, the Greek-led Operation Irini, under which the German frigate Hamburg was operating, was initiated in March by the EU in the Eastern Mediterranean Sea without satisfying these requirements.

Operations headquarters of Operation Irini is located in Rome, with the commander of the headquarters being Italian, its deputy commander French and commander of its maritime components Greek, while its naval forces included Greek, Italian, and German frigates, the statement added.

The crew of Rosaline-A was questioned via radio by the German Hamburg frigate at around 12.30 p.m. local time [0930 GMT], it recounted.

“Despite not having the consent of the flag state and captain of the ship, the German frigate’s armed and equipped search team boarded the vessel via a helicopter at 6 p.m. [1500 GMT] by force.”

The ministry added that the team had conducted a thorough search and left the vessel on the next morning at 9.30 a.m. [0630GMT] again via helicopter.

Accusing the search team of treating the Rosaline-A’s crew “as criminals” during the roughly 16-hour search when they were gathered in a single place, it went on to say that the search was terminated upon Turkey’s persistent protests, as well as the failure to find a “suspicious situation” on board as the cargo consisted only of flour, oil, biscuits, meat, cosmetics, health, and “similar consumption and construction supplies.”

Turkey expects allies to act in line with international law

The ministry said it was worrying that such an “unlawful practice” was carried out by an allied navy.

“It is clear that the operation commander, who commanded the ships at sea in this wrongful practice, behaved biased and emotionally.

“All of our rights in this matter are reserved. It should not be forgotten that this type of bullying will set an example for other practices,” it said.

Questioning Operation Irini’s legitimacy, the ministry said it violated the principle of freedom of the open seas and ignores the support provided to putschist Khalifa Haftar’s forces in Libya.

It stressed that Turkey, since the beginning, held the position that the Libyan crisis could only be resolved through political dialogue, not military means.

It said Turkey was ready to work towards the preservation of peace and stability in the region and to increase the necessary cooperation and coordination by preventing such incidents.

“We expect all parties, especially our allies, to act in accordance with international law, maritime law and customs,” it concluded.

A new government was founded in 2015 under an UN-led agreement, but efforts for a long-term political settlement have failed in the face of attacks by the warlord Haftar.