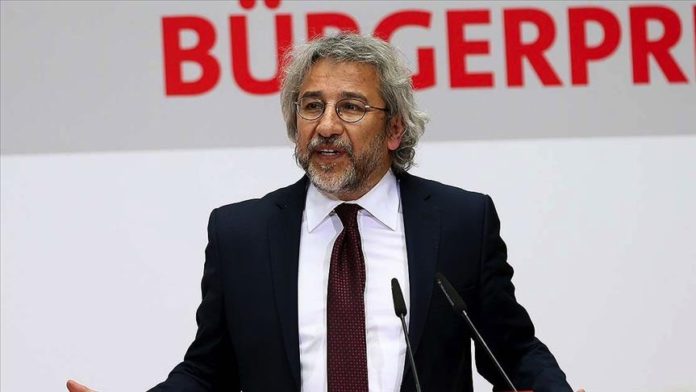 A Turkish court on Wednesday sentenced a fugitive to 27 years and six months in prison for aiding the terror group FETO by publishing state secrets, although not being a part of the hierarchical structure of the organization.

Under the indictment submitted to Istanbul’s High Criminal Court no:14 on Oct. 14, Can Dundar could get anywhere from about 22 to 35 years behind bars.

The trial was held in absentia of Dundar, while President Recep Tayyip Erdogan and National Intelligence Organization (MIT) head Hakan Fidan were represented by their attorneys.

The Public Prosecutor repeated his opinion on the sentence — 15 to 20 years for espionage and 7.5 to 15 years for aiding the terror group.

The court sentenced the defendant to 18 years and nine months in jail over charges of “providing information — which should remain confidential for the security of the state or domestic or foreign political benefits — with a purpose of political or military espionage”.

The court also said Dundar aided the FETO terror group although he was not part of the hierarchical structure of the terror group, adding that the defendant was the editor-in-chief of a publicly known Turkish daily (Cumhuriyet) on the date of the crime and created a perception among the public in favor of the terror group via publishing the news which was also later used by the terrorist organization.

Noting that the story circulated in the international arena to reduce Turkey’s political power to a position of “a state sponsor of terrorism” both in the domestic public and in the international arena, the court said the penalty to Dundar was thus given avoiding the lower limit, considering the caused damage and the gravity of the danger, as well as the benefit provided to the terrorist organization.

So, over the charges of aiding a terror group, Dundar was sentenced to eight years and nine months.

In total, he is sentenced to 27 years and six months in prison.

The indictment said that in publishing the images, Dundar helped the Fetullah Terrorist Organization (FETO) without being a member of the terror group.

US: Family sues after woman fatally shot by police