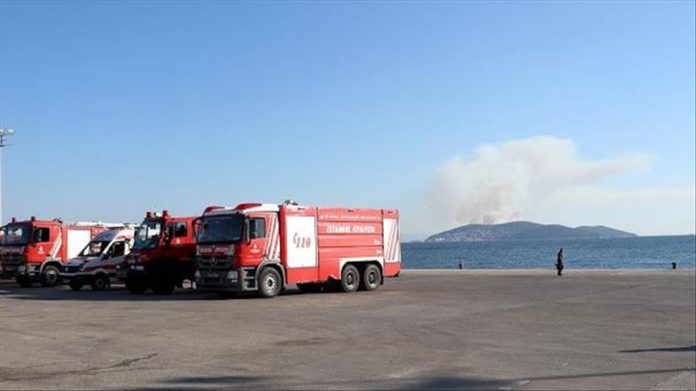 A forest fire broke out on one of Istanbul’s Princes’ Islands on Sunday.

Forest teams first responded at 17.36 (1536GMT) to the fire that broke out at 17.33 [1533GMT] on Heybeliada, noted Yerlikaya, adding that he was personally making his way to the island.

At least six helicopters, two planes and 21 water trucks — including 17 from neighboring provinces — were deployed to the region to battle the fire.

Also, residents with training in fire fighting were called to aid extinguishing efforts by the Adalar Municipality.

Flames erupted at two different points in forested areas on Heybeliada, according to the local officials in the province.

“To extinguish the fire, three helicopters and two fire extinguishers were sent from adjacent provinces by the Agriculture and Forestry Minister,” it said, adding that a “wide-scale investigation” had been launched into the incident.

Heybeliada is one of the four Princes’ Islands in the Marmara Sea and the second-largest among Buyukada, Burgazada and Kinaliada famed for their natural forests.