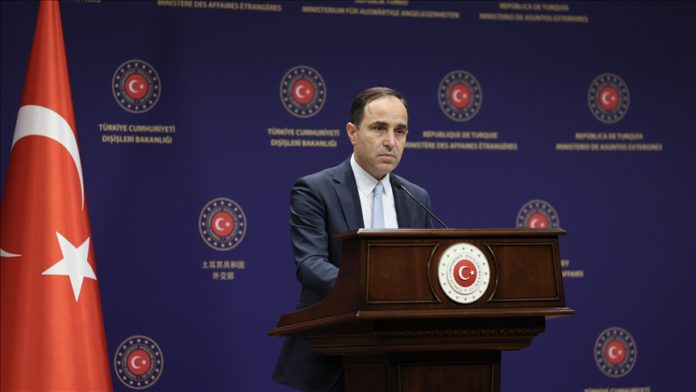 Turkey is the only NATO country to have fought the terror group Daesh/ISIS on the ground, said the Turkish Foreign Ministry late Tuesday, rebuffing recent remarks by Greece.

“Turkey is the only NATO member with its army on the ground in the fight against Daesh (ISIS),” and to date it has cleared more than 8,200 square kilometers (3,166 square miles) in Syria of the terror group, tweeted Foreign Ministry spokesman Tanju Bilgic, in response to an interview with Greek Foreign Minister Nikos Dendias.

In the interview published Sunday, Dendias falsely accused Turkey of not contributing to the fight against Daesh/ISIS.

Bilgic added that Turkey also serves as co-leader of the Foreign Terrorist Fighters Working Group and is an active contributor to blocking moves by foreign terrorist groups.

“Recent baseless statements aimed at obscuring Turkey’s role against Daesh (ISIS) stem from political motives,” Bilgic continued, adding that “Greece itself is a safe haven for terrorist organizations with a disgraceful track record.”

Greece has provided haven for accused members of the Fetullah Terrorist Organization (FETO) – the group behind the 2016 defeated coup in neighboring Turkey – as well as the leftist terror group DHCKP-C.

“Repeated slandering … is a sign of insecurity and the burden of guilt,” Bilgic concluded.