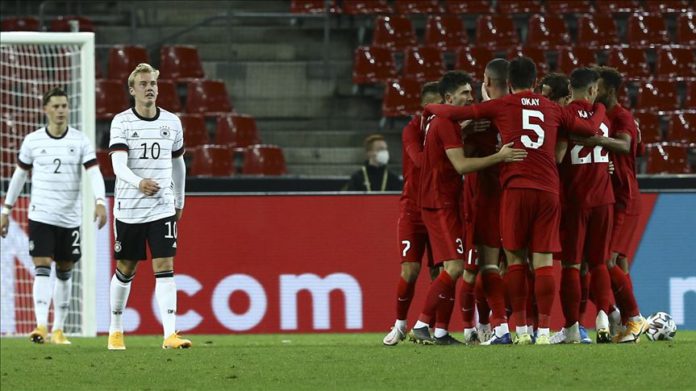 The Turkish national football team fought hard to earn a 3-3 draw against Germany with a late goal in a friendly match Wednesday.

The Germans drew first blood at RheinEnergie Stadium in Cologne as the home team took the lead with a counter attack near the end of the first half.

German midfielder Julian Draxler latched onto a through ball to score against Turkey. He was assisted by Kai Havertz.

Germany led the first half 1-0.

But Turkey equalized in the 50th minute as midfielder Ozan Tufan scored a spectacular goal from outside the box.

Florian Neuhaus made it 2-1 for Germany in the 58th minute as his left-footed shot in the box beat Turkish goalkeeper Mert Gunok.

Neuhaus scored on his debut. Havertz produced another assist.

Karaca tackled his German opponent Neuhaus to control the ball. Once Karaca had it, he rushed towards the German goal to finish 2-2.

Following the equalizer, German players argued with the referee as they claimed that Karaca fouled Neuhaus when the Turkish player had the ball.

In the 81st minute, Germany led the game again as forward Luca Waldschmidt — unmarked in the box — fired with his left foot to make it 3-2 for his country. Turkey’s Gunok could not parry his powerful shot.

Turkey did not give up however as forward Kenan Karaman scored an injury time goal to secure the 3-3 draw.

Turkish star Cengiz Under flicked the ball into Germany’s penalty area. His teammate Abdulkadir Omur did not waste time to pass it to Karaman.

Karaman, who was alongside Omur and unmarked in the box, made a low shot to finish.

The Turkish team will play Russia in Moscow this Sunday and return home to host Serbia in Istanbul next Wednesday.