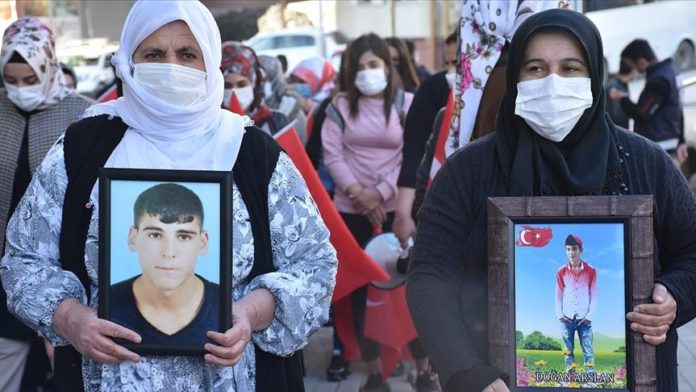 Families suffering from the bloody four-decade PKK’s terror campaign staged a protest in Turkey’s southeastern province of Sirnak on Thursday.

Women whose children were abducted by the terror group, and families who lost their loved ones to the PKK terrorist attacks, gathered in front of the provincial headquarter of the Peoples’ Democratic Party (HDP) — which the government accuses of having links to the YPG/PKK — after marching through main streets of the city.

With Turkish flags and pictures of their abducted children in their hands, families chanted anti-PKK and anti-HDP slogans.

During the protest demonstration, a police intervention stopped a confrontation between a pro-HDP person and protesting families from turning into a serious scuffle.

Hamide Arslan, whose son was abducted by the PKK five years ago when he was 14, remarked she has come all the way from Idil district to Sirnak.

“While the HDP deputies preach about freedom, they don’t mention our children. I want my son back. I want him back from the HDP, which facilitated his abduction by PKK,” she said.

Emine Ustek, another woman, noted that his son Metin Ustek was also abducted by the PKK five years ago and will continue to participate in the protest every Thursday until he returns.

In its more than 30-year terror campaign against Turkey, the PKK — listed as a terrorist organization by Turkey, the US, and the EU — has been responsible for the deaths of 40,000 people including women, children, and infants. The YPG is the PKK’s Syrian offshoot.