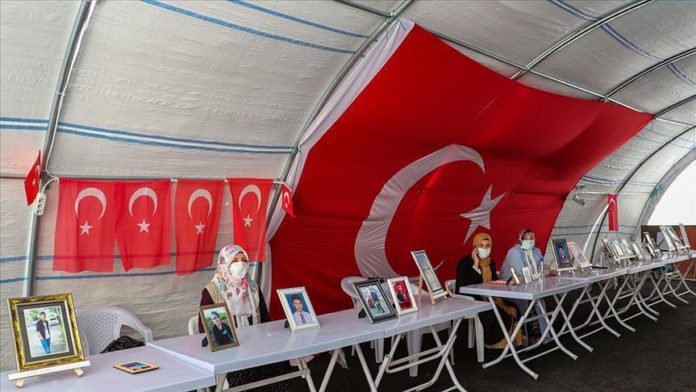 A sit-in in southeastern Turkey by families pleading for the return of their children kidnapped by the YPG/PKK terror group has entered its 284th day.

The protest started on Sept. 3, 2019, in Diyarbakir province outside the office of the opposition Peoples’ Democratic Party (HDP), a party accused by the government of having links to the YPG/PKK.

Solmaz Ovunc, whose son was abducted five years ago, said she has been staging a sit-in for 284 days and that she will continue the sit-in until the return of her son.

“HDP took my son and handed him over to the PKK. The PKK did not come and take my son from the neighborhood, from his school, but took him from HDP [office],” Ovunc said.

“If you hear me, my son, come and surrender yourself to justice. They are deceiving you. 13 people came and reunited with their families,” she added.

The families also gave support to Maide T, a German-Turkish mother living in Germany whose child was kidnapped by the PKK terror group.

Celil Begdas, the father of another kidnapped boy, said he will continue to stage a sit-in until he meets his son.

Begdas also gave support to Maide T and said: “Mother Maide called us and said [the PKK terrorists] kidnapped her daughter by saying they are going to a picnic. We all support her [mother].”

“She also wants her daughter back. She feels lonely there. We can go there if needs be,” he added.