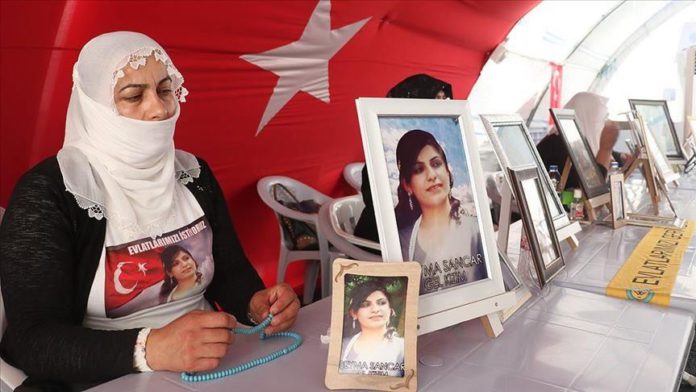 Families continue their protest outside an opposition political party’s office in Turkey’s southeastern Diyarbakir province, demanding the return of their children abducted by the YPG/PKK terror group.

The protest started on Sept. 3, when mothers said their children had been forcibly recruited by PKK terrorists. The sit-in of families has since been growing day by day with the participation of many others.

The families’ protest takes place outside the office of Peoples’ Democratic Party (HDP), which the government accuses of having links to YPG/PKK.

Monday marked the 315th day of the protest but families of abducted children are determined to continue their sit-in until the return of their children.

Zumrut Salim, whose 14-year-old son was abducted in 2014, said the families would not leave the protest site as long as their children were not brought back.

She accused the HDP members of sending her son to the terror group and called on her son to surrender to security sources.

Another protester, Fatih Demir, said all he wanted was the return of his beloved child and he would not end his protest until his son returns.

“God willing, everyone will experience this happy day [return of children] here in this tent,” he said, calling on families to stand tall.

“If these [PKK and HDP] had conscience and compassion, they would not have taken a 12-year-old girl to the mountains and handed her weapons. Most of the children abducted are between 13-17 years old. Is this humanity, is this justice?” he lamented.

In its more than 30-year terror campaign against Turkey, the PKK — listed as a terrorist organization by Turkey, the US and the EU — has been responsible for the deaths of some 40,000 people, including women, children and infants. The YPG is the PKK’s Syrian offshoot.