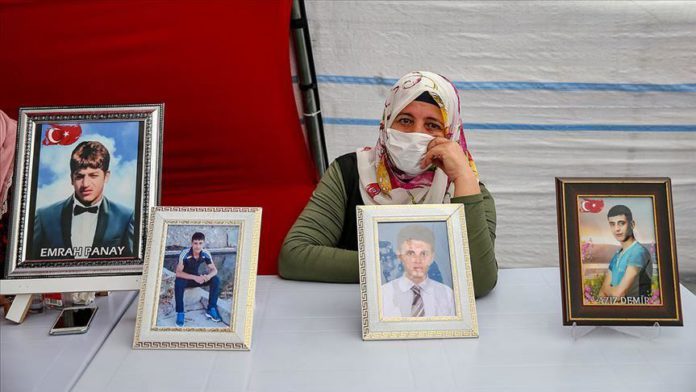 A sit-in protest in southeastern Turkey against the terrorist YPG/PKK continued on Friday with parents demanding the return of their children they say the terror group kidnapped.

On the 340th day of the protest, Solmaz Ovunc, a mother who claimed her son Baran was abducted by the YPG/PKK, said she would rescue her son from the terrorist group. Ovunc said her son was young and the terrorists tricked him into joining the group.

“I will not go back without receiving my son. Baran, if you hear me, come and surrender to justice,” the mother urged her son. Ovunc said the HDP had tricked her son and kept him in the Diyarbakir province office for a month.

Abdullah Demir, a father who has been waiting for his children for the last five years, told Anadolu Agency, “If they [terrorists] had a conscience and mercy, they would not do this. They destroyed our house. Who would put politics over children?”

The protest started last September when Fevziye Cetinkaya, Remziye Akkoyun, and Aysegul Bicer said their children had been forcibly recruited by the PKK terrorists.

Since then, the number of families protesting in front of the building and demanding the return of their children – who, they claim, were deceived or kidnapped by the terror group – has been rising.

In its more than 30-year terror campaign against Turkey, the PKK – listed as a terrorist organization by Turkey, the US, and EU – has been responsible for the deaths of 40,000 people, including women and children. The YPG is the PKK’s Syrian offshoot.