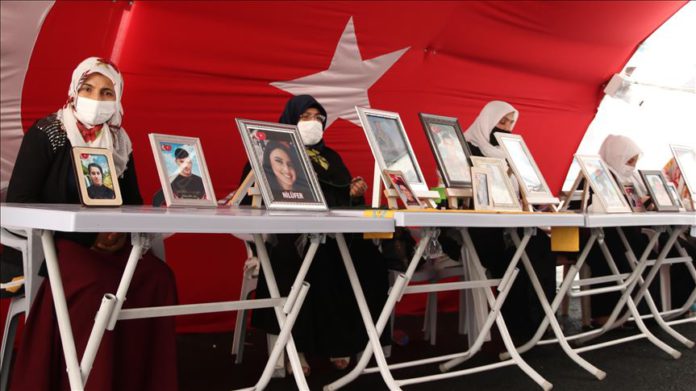 A group of aggrieved families in southeastern Turkey continued a sit-in protest during the Muslim Eid al-Adha holiday against the YPG/PKK terror group outside the office of a political party.

The protest — now in its 336th day — began on Sept. 3 last year in the city of Diyarbakir when Fevziye Cetinkaya, Remziye Akkoyun and Aysegul Bicer said their children had been forcibly recruited by PKK terrorists.

The sit-in outside the office of the Peoples’ Democratic Party (HDP), which the government accuses of having links to the YPG/PKK, has been growing day by day with the participation of many others since then.

The protesters have vowed to continue the sit-in until all of the families are reunited with their children.

Holding a photograph of her abducted child, one of the mothers, Solmaz Ovunc, voiced her determination to stay until she got her son Baran back.

“I want my son from the HDP. The HDP must bring back my son, just as it took him.”

“I could not see my son growing up. If they [the HDP and PKK] have some conscience, compassion and fear of Allah, they will let my child come back,” she said, adding it has been 11 months of protesting in front of the HDP building and she would not give up even if 11 years passed.

Most Muslim-majority countries around the world, including Turkey, are currently observing the four-day Eid al-Adha holiday.

“I miss spending the Eid with my child. Unfortunately, they made us live this Eid like this. Our holiday became poison,” he said.

Another protesting father, Celil Begdas, who had been sitting for his son Yusuf, said HDP administrators threatened him, saying “You have not died yet. You should be dead.”

He sued them at the Diyarbakir Public Prosecutor’s Office, claiming he was also threatened by three people in a black car on his way home Sunday night.

“They told me not to go to the HDP building and threatened me, saying ‘If you go, we will do what it takes.’”

He stressed that he is not afraid of threats and will continue to demonstrate with determination.

Opinions change in UAE as Biden leads in US polls