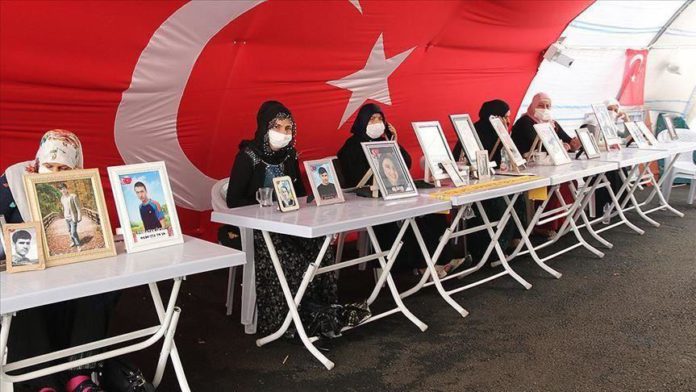 A sit-in by families whose children have been kidnapped by YPG/PKK terrorists entered its 390th day on Saturday.

The grieving families have vowed to continue the protest until every family is reunited with their children.

One mother, Immihan Nilifirka, said her son Mehmet was a student at Ege University in the Aegean Izmir province and there were two months to graduation when he was kidnapped.

“HDP did not let him go, they took the pen from my son’s hand and took him to the mountains… They stole my son’s youth, life and future,” Nilifirka said.

Underlining that a total of 17 families reunited with their children, she said they will continue protesting until there are no children left in the mountains, referring to hideouts of the terror group.

She called her son to surrender to security forces.

Cennet Kabakli, a mother, said her son Adil was kidnapped and taken to the mountains by the YPG/PKK and HDP in 2015.

“HDP took my son and left him in PKK’s hand,” Kabakli said, wishing all mothers to reunite with their children.

Jerusalem's Al-Aqsa Mosque to reopen on May 31