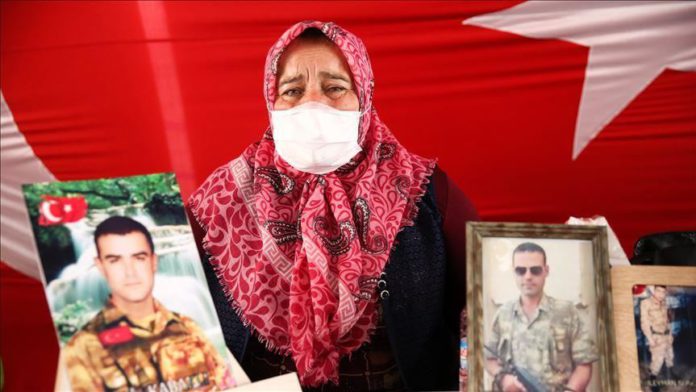 A long-running sit-in in Turkey by families whose children have been kidnapped by YPG/PKK terrorists entered its 387th day on Wednesday.

The protest began on Sept. 3 last year in the southeastern Diyarbakir province, when Fevziye Cetinkaya, Remziye Akkoyun and Aysegul Bicer said their children had been forcibly recruited by YPG/PKK terrorists.

The grieving demonstrators have vowed to continue the sit-in until every family is reunited with their children.

Among protesting parents, Cennet Kavakli said she would continue to protest until she was reunited with her son Adil, who was kidnapped by the YPG/PKK in 2015 when he was 19.

“I will not leave here without my son. Give me my son back, I have no strength to endure,” Kavakli said.

Abdullah Demir, a father of a boy who was kidnapped five years ago when he was 11, also vowed that he would continue his protest until he was reunited with his son, Fatih.

Demir called on his son to surrender to security forces and said: “My son, if you hear me, escape from them and turn yourself into justice.”

US: Turkish Restaurant Week kicks off in DMV area