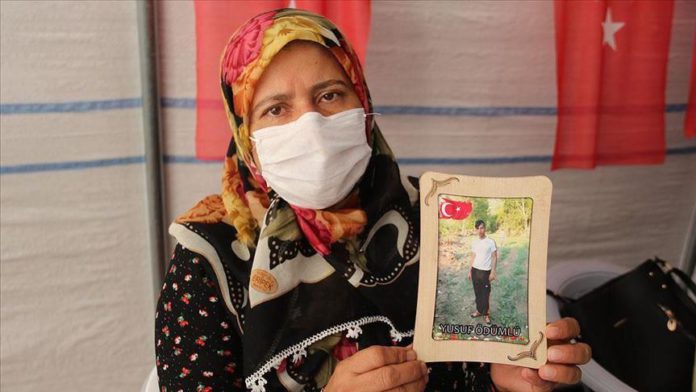 A group of aggrieved families in southeastern Turkey continued a sit-in protest on Monday against the YPG/PKK terror group for the 329th day outside the office of a political party.

The protest began on Sept. 3 last year in the city of Diyarbakir, when Fevziye Cetinkaya, Remziye Akkoyun and Aysegul Bicer said their children had been forcibly recruited by PKK terrorists. The sit-in outside the office of the Peoples’ Democratic Party (HDP) — which the government accuses of having links to YPG/PKK — has been growing day by day with the participation of many others since then.

Protesters have vowed to remain at the sit-in until every family reunites with their child.

With a photograph of her abducted child in hand, one of the mothers, Saadet Odumlu, voiced her determination to stay until she got her son, Yusuf, back.

She urged the HDP, which she claimed took Yusuf in the nearby Siirt province, to return him to his family after he was kidnapped seven years ago.

“Come my son, I miss you very much. Enough, it’s been seven years. If you love me, come back. I’ll never leave from here until you come,” she called out.

Haci Guger, a protesting father, said his son Dogan was kidnapped five years ago in front of the HDP building after coming under their influence.