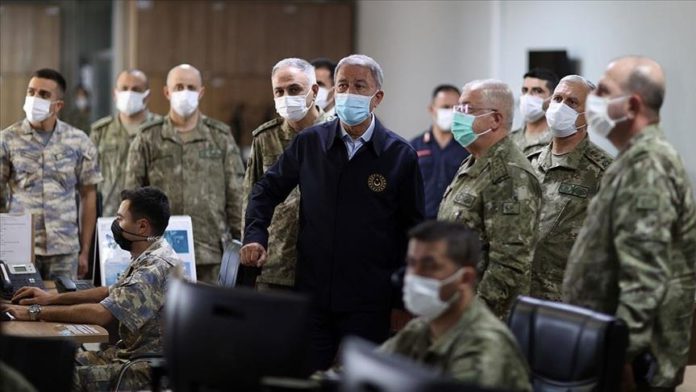 Turkey expects its Greek neighbors to strive for peaceful and political solutions, “not aggressive ones,” and to contribute to Turkey’s efforts to solve problems, National Defense Minister Hulusi Akar said on Monday.

“We always tell our Greek neighbors that we favor finding political solutions to problems through peace, tranquility, and dialogue within the scope of agreements. Our Greek neighbors, on the other hand, have not given up on provocative statements and aggressive rhetoric,” said Akar, visiting Turkish troops near the border with northern Syria, where they are dispatched on counter-terrorism missions.

He underlined that Turkey continues to resolutely carry out its duties to protect the nation’s rights and interests in the Aegean, Mediterranean, and the island of Cyprus.

Citing peace agreements ending World War I and setting the basic borders of the Republic of Turkey, Akar continued: “We say this sincerely. There is the (1923) Lausanne agreement and also the (1920) Paris agreement. Our Greek neighbors tend to ignore and neglect even these. This is unacceptable.”

Turning to Greece’s militarization of Aegean island near Turkey – in violation of treaties – he added: “There are islands that have non-military status by treaties. The parties made this agreement and said, ‘These islands can’t be armed, they will have non-military status,’ and we agreed to this. (But) now they are getting armed. They (Greeks) say, ‘There is a threat.’ There is never any threat. Turkey does not have any aggressive attitude towards Greece at the moment. We call it dialogue, international agreements, the law, conventions. However, this peaceful approach of ours is constantly turned upside down with provocative statements.”

Referring to islands, islets, and rocks in the Aegean Sea, Akar said: “Our Greek neighbors have an aggressive attitude to lay claim to them as well.”

On Greece’s recent race to acquire new and expensive arms, Akar said Athens is in the midst of an “arms race.”

“They buy planes, weapons, equipment. (But) it is not possible to change the balance of power with three or five used aircraft,” he said.

Turkey continues to hold consultative talks with Greece as well as do-confliction talks through NATO, he said.

“We also held three meetings, two in Athens and one in Ankara, within the framework of confidence-building measures,” said Akar.

“We sincerely invite them to hold the fourth meeting in Ankara. We expect our Greek neighbors to support peaceful solutions and thus make the Aegean and Mediterranean seas of peace and contribute to the welfare of the parties. Otherwise, it makes no sense for Greece, which is in so much debt, to deal a blow to the welfare of its people with additional expenses. Because we favor the peoples of the two countries living in peace and prosperity in good neighborly relations. All our work is directed towards this.”

Akar also decried how Athens violated a longstanding bilateral agreement under which no naval exercises are held during tourism season or the national days and holidays of both sides.

“Unfortunately, our Greek neighbors ignore this and violate it,” he said, citing Greece’s navigational alert, or Navtex, for exercises during tourist season and Turkish holidays.

Under the 1988 Athens Memorandum, the international waters of the Aegean Sea are off-limits to military training during high tourism season, from June 15 to Sept. 15.

He stressed that Turkey’s call for peace, international law, and good neighborliness should not be mistaken for weakness.

“We are determined to protect and safeguard our rights and interests in the Aegean, Eastern Mediterranean, and Cyprus as well as the rights and interests of our (Turkish) Cypriot brothers and sisters. Whatever needs to be done in this regard, we have done and will continue to do so with determination. Let no one doubt that,” he said.

Turkey will not allow “any fait accompli” in the region, he stressed.

“To date, we have not violated rights, nor will we in the future,” he added.

In addition to Greece arming islands near Turkey, in violation of longstanding treaties, Turkey has also decried Greek efforts to claim maximalist maritime territory in the Eastern Mediterranean, confining Turkish waters to a small area in the south, although Turkey has more Mediterranean coastline in the region than any other country.

Turkey has stressed it seeks negotiations for a fair sharing of the region’s energy resources, and also seeks a two-state solution on Cyprus, in recognition of the Turkish state there, with Turkey protecting Turkish Cypriot rights as a guarantor state under treaty.