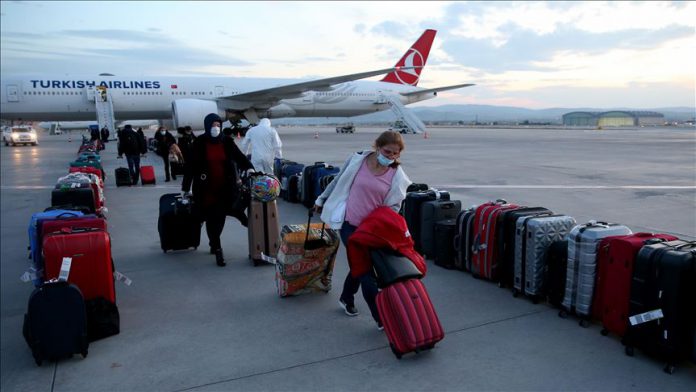 As part of Turkey’s efforts to evacuate its nationals from abroad due to the coronavirus outbreak, the country on Tuesday sent a national flag carrier plane to Kyrgyzstan.

Turkish citizens in the southern Jalal-Abad and Osh provinces were brought to the capital Bishkek by the initiative of the Turkish Embassy.

Bedirhan Can, one of the passengers, told Anadolu Agency that he came to study in Kyrgyzstan 10 years ago.

Can, who is an academic at a university in Jalal-Abad, said Kyrgyzstan declared a curfew and halted international flights amid the outbreak.

“I thought we would probably be stuck here for like five or six months,” Can said, while praising the government’s effort in the evacuation process.

“A vehicle was sent to take six people in Jalal-Abad, 560 kilometers [roughly 348 miles] away from Bishkek. There were 40 checkpoints on the way,” he said, adding that transition permissions were received via diplomatic means within 24 hours.

The evacuation was carried out in coordination with Vice President Fuat Oktay, and the Foreign Ministry under the instructions of President Recep Tayyip Erdogan.

Turkey became one of the very first countries to step into action, and brought thousands of expats from Asia and Europe.

The first virus case in Jalal-Abad was reported on March 18. As part of the country’s measures in fighting COVID-19, Kyrgyzstan shut down its borders and halted flights.

The number of COVID-19 cases in the country rose to 590, and a total of 216 people recovered, while seven people died so far.

After being first detected in China late last year, the virus has spread to 185 countries and regions. It has killed more than 170,500 people and infected over 2.48 million, while nearly 653,800 have recovered, according to the U.S.’ Johns Hopkins University.