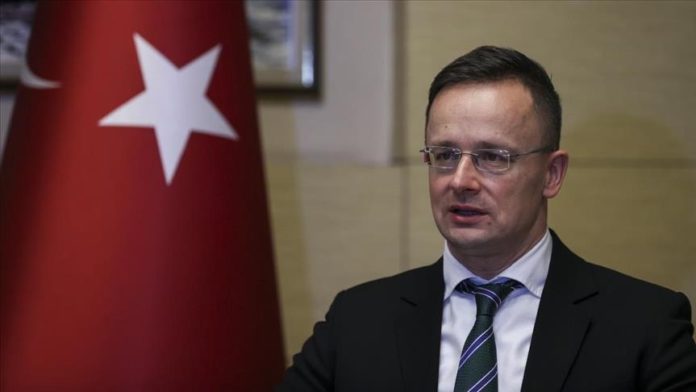 The Hungarian foreign minister said his country sees Turkey a strategic partner of the EU, and that Hungary defends a foreign policy based on this principle, instead of one on hostility against Turkey.

Following his working visit in the capital Ankara, Peter Szijjarto spoke to Anadolu Agency in an exclusive interview on bilateral and regional ties between Turkey and Hungary as well as his country’s stance in Turkey-EU relations.

“We consider Turkey a strategic partner, not only for Hungary, but also for the EU, as Turkey is a country with the strongest economy in Europe’s neighborhood,” Szijjarto said.

Hungary understands Turkey’s intention to become one of the top 10 economies of the world soon, he said, adding that his country wishes to have effective and dynamic cooperation with Turkey as they seek to increase bilateral trade volume to $5 billion.

“We consider Turkey a strategic partner of the EU and that’s why we argue in favor of a policy towards Turkey based on this principle, instead of [a policy on] hostility, hypocrisy, double standards, judging, and lecturing,” Szijjarto said, responding to a question of what would be Hungary’s attitude toward possible EU sanctions at the Euro Summit on Dec. 10-11.

Despite all its negative effects, said Szijjarto, the pandemic would have at least one positive impact that all countries would understand international cooperation based on mutual respect is more needed than ever.

“Turkey-Hungary relations are based on this principle. I mean mutual respect. That’s why we can talk to each other even if there are issues which we might have different approach,” he added.

Referring to some EU countries’ reactions to his country’s state of emergency decision due to the pandemic, Szijjarto stressed that there are also countries like Turkey who extended helping hand to Hungary during its difficult times.

He also recalled and hailed the good cooperation between Hungary — the observer member of the Turkic Council — and other member states — Turkey, Uzbekistan, Azerbaijan, and Kazakhstan — during the pandemic.

Hungary not moving away from EU

Rejecting the criticism towards Hungary and Poland on “moving away from the EU”, Szijjarto said his country is a member, a part of the union and that they are happy with that.

“[…] but we want to make European Union stronger and we do not agree with others on how to make it stronger,” he said.

Along with the COVID-19, there are historical challenges ahead of the EU such as migration, economic issues, and Brexit, noted Szijjarto, adding: “So I think this is the right time to have debates on which way to go forward.”

“There’s an approach which says that EU should operate as the United States of Europe with a strong center and strong concentration of powers in Brussels. This is what we don’t share,” he added.

He went on to say that they support an EU with a strong alliance of strong member states and strong nations.

Touching on migration policy, Szijjarto said Hungary defends the idea of helping migrants and improving their circumstances in a way that they can stay at home rather than encouraging people to start to hit the road through Turkey to Europe.

“The problem is that some politically and ideologically motivated issues are being confused with these economic issues, which have nothing to do with each other because the so-called rule of law, and procedures are nothing more than a rule of blackmail, or rule of the majority,” he said on the vetoing the EU budget.

Pointing out some initiatives trying to exclude Poland and Hungary, Szijjarto said: “We will not let that happen.”

On Tuesday, Szijjarto was received by Turkish President Recep Tayyip Erdogan and held joint news conference with Turkey’s Foreign Minister Mevlut Cavusoglu as part of his official visit to Ankara.