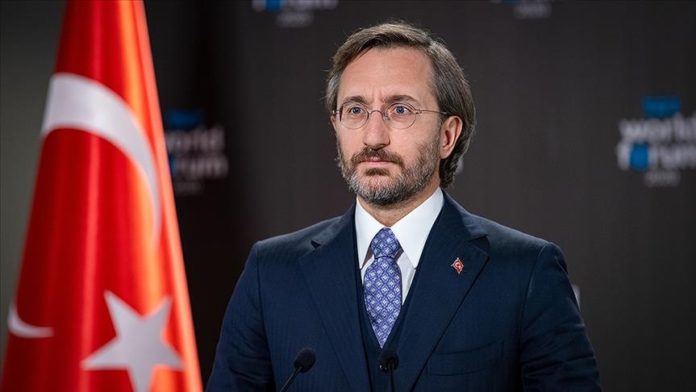 Turkey is pursuing closer ties with the EU, as cooperation between the two is needed to fight discrimination on the continent, said Turkey’s communications director on Tuesday.

“Our cooperation and collaboration are key to countering the message of hate and discrimination in Europe.”

Altun also urged the bloc to prove that it has nothing against Muslims by treating Turkey with respect.

“The idea that Turkey must earn Europe’s friendship by making concessions is both unfair and unrealistic. Instead, we tell our European counterparts that dialogue is the only way forward,” he said.

Calling the Turkish community living in Europe “a model minority,” Altun decried the aggressive discrimination they face in the region.

He urged particularly Europe to stand against “anti-immigrant and anti-Muslim sentiment before history repeats itself,” and to work together to reject racism and extremism.

On relations between Turkey and the US, Altun said Washington has been showing hostility to Ankara in recent years, despite their being NATO allies.

“Our unwavering commitment to fighting terrorists, whether they call themselves the PKK or Daesh [ISIS], has been incomprehensibly misportrayed,” he said, adding that US foreign policy does not serve their own interests either.

“It is our sincere hope that the United States, under its new administration, will repair its strained relationship with its traditional allies and show due respect to their vital interests,” Altun said.

He also said the emerging new world order should “look out for everyone’s rights and interests.”

There are two areas humanity needs to focus on, he said, starting with creating alternatives to existing global supply chains to improve economies’ ability to absorb future shocks.

“There is no reason to believe that the COVID-19 pandemic will be the last public health emergency in history,” he said.

Altun said the second area is the need to double down on multilateralism and international organizations.

“Starting with the United Nations, we must reform and improve our organizations so that they can keep the peace and facilitate human progress for decades to come,” he said.

“Turkey, as a longstanding advocate of UN reform, is willing and able to contribute to a meaningful reform agenda internationally,” Altun said, in a reference to President Recep Tayyip Erdogan’s mantra that “the world is bigger than five,” advocating that the UN Security Council break out of the dominance of its five permanent members.

Also speaking at the opening of the forum, TRT Chairman Ibrahim Eren said: “We have internalized the value of being a voice for the voiceless, and we launched the TRT World Forum with the same sensitivity.”

This year’s fourth TRT World Forum, held virtually due to the coronavirus pandemic, carries the theme “Shifting Dynamics: The International Order in a Post-Pandemic World.”

Telling how the forum was launched to provide a global platform to “discuss the most pressing issues of our time with some of the world’s leading experts,” Eren said this year’s theme “is timely, not only because the coronavirus pandemic has acted as an accelerator of changes already underway, but, perhaps more importantly, because it has underlined the extent to which our world is truly a globalized society.”

“While the pandemic undoubtedly has presented opportunities for positive reform, it has also exposed and in some senses re-enforced the growing chasm between the ‘haves’ and the ‘have nots,’ both within countries and between them,” he added.

Eren also said the global pandemic showed “how the world is inseparably connected. It has motivated us to work even harder and speak even louder.”

“It has renewed our belief that, whether we like it or not, we are all indeed in the same boat,” he added.

Turkey: Hazelnut exports up over 43% in 4 months