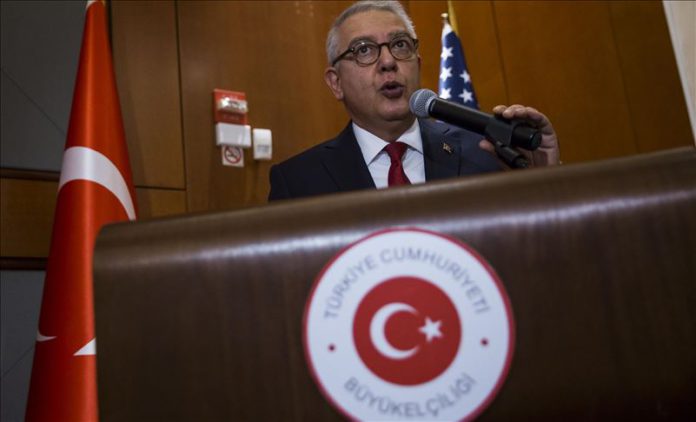 Turkey’s Ambassador to US, Serdar Kilic, hit back Friday at two American senators for comments regarding Ankara’s treatment of Uyghurs.

In retort to Risch, Kilic said: “Senator, common sense based on facts and realities suggest that what really shameful is to see the Chairman of such an important Committee subscribe to unsubstantiated and biased allegations incriminating a key Ally, without even questioning whether there is any truth into them.”

“As Beijing pushes its own extradition and intimidation campaign against minorities, Turkey should rededicate itself to the protection of persecuted Uyghurs,” wrote Markey.

In his response to Markey, Kilic regretted that “some” Congress members are quick to appeal to biased allegations against Turkey.

“Believe me Mr Senator, nothing can match the level of abuse Turkey and Turkish authorities are subjected to by some members on the Hill. This tweet clearly displays yet again that some of them don’t even hesitate to subscribe to unsubstantiated and biased allegations to that end,” Kilic replied on Twitter.

The report by Axios news website cited authenticated documents allegedly conveyed by China to Turkey regarding a “secret extradition request” for a Uyghur named Enver Turdi. China accused him of “running a pro-Islamic State website.” Turdi denies the accusation.

Turdi was sent to a criminal court and his case is still pending in the Turkish courts, according to the report.

In a letter sent separately to both senators, Kilic said allegations concerning the extradition of Uyghur Turks to third countries are “mere fabrication and as such are far from reflecting the truth.”

“Given our historical background and the fact that we share a common language, religion and culture with the Uighur Turks, any issue pertaining to their well-being holds a special place on our agenda,” he said.

The Turkish envoy added that extradition and judicial requests by China are examined in accordance with international law based on “full respect to human rights and within the framework of established practice.”

China’s Xinjiang region is home to 10 million Uyghurs. The Turkic Muslim group, which makes up around 45% of Xinjiang’s population, has long accused Chinese authorities of cultural, religious and economic discrimination.

Thousands of Uyghurs have sought refuge in Turkey after fleeing Beijing’s brutal crackdown since 2014.