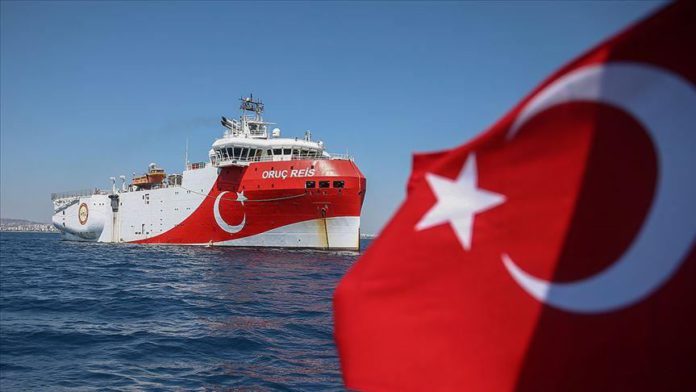 The renewed efforts of Turkey’s seismic research vessel, the Oruc Reis, in the Eastern Mediterranean will be within the Turkish continental shelf hundreds of kilometers away from the Greek mainland, the Turkish Foreign Ministry said Monday.

Responding to a recent Greek statement decrying Turkey’s NAVTEX (navigational telex) in the region, the ministry said in a written statement that the vessel had undergone maintenance in Turkey’s southern Port of Antalya for a month and would continue its activities until Oct. 22.

The statement said the ship would be active in an area 425 kilometers (264 miles) off the Greek mainland and only 15 kilometers (9.3 miles) from Turkey, adding that the Greek statement was a mere repetition of Athens’ baseless allegations in violation of international law.

It underlined that Turkey had the longest shoreline in the Eastern Mediterranean region and the Greek objection to its activities just kilometers from the Turkish mainland was unacceptable.

The objection by Greece was based on its maximalist approach boosted by the Seville Map, which was announced legally invalid both by the US and EU, the ministry added.

According to the statement, even Greek authorities were aware that a single island — Kastelorizo, or Meis — would not constitute a maritime area stretching for 40,000 kilometers, and this demand neither complied with the international law nor international court rulings.