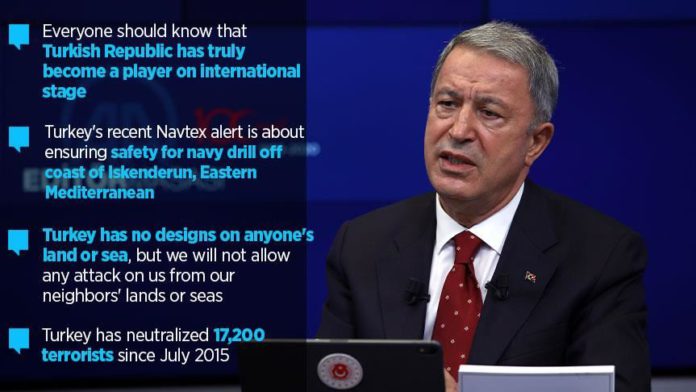 Trying to test Turkey’s power would be unwise, said the nation’s defense minister on Thursday, reiterating that it is both determined and able to protect its own rights and interests.

Everyone should know that the Turkish Republic has truly become a player on the international stage, Hulusi Akar told Anadolu Agency’s Editors’ Desk.

Akar spoke on a range of issues, including Turkey’s rising international profile and its stance on tensions in the Eastern Mediterranean.

The Navtex maritime alert Turkey issued on Sunday was to ensure the safety of its naval forces in the Eastern Mediterranean during a training off the coast of Iskenderun, southern Turkey, said Akar.

Greece had criticized the alert and the next day issued a competing Navtex for maritime drills, in the process raising tension in the region.

On disputes over maritime boundaries in the Eastern Mediterranean, Akar stressed that Turkey has no designs on anyone’s land or sea, but the country will not allow any attack on its territory from its neighbors’ lands or seas.

On Turkey’s borders in the Eastern Mediterranean, he explained: “We said what would happen if you violated them. But we always stress that we favor dialogue.”

Against Greece’s “maximalist” maritime claims, trying to confine Turkey to shore based on small Greek islands just off the Turkish coast, Turkey has sought dialogue to reach fair sharing through a win-win approach.

Turkey would be happy to welcome its Greek counterparts if they decide to sit down and talk, he added.

“Turkey’s power should not be tested,” said Akar, reiterating that Turkey is determined and able to protect its own rights and interests.

Dialogue over the Eastern Mediterranean should be the first option, otherwise undesirable situations could follow, he cautioned.

Ankara has also said energy resources near the island of Cyprus must be shared fairly between the Turkish Republic of Northern Cyprus (TRNC) – which has issued Turkish state oil company Turkish Petroleum a license – and the Greek Cypriot administration of Southern Cyprus.

“France’s claims that Turkey harassed a French ship were proven false. France should apologize to the Turkish Republic,” Akar said, referring to an incident this June near Libya.

Turkey said a NATO investigation of the incident proved its ships did nothing wrong.

Ankara has opposed French interference in the Mediterranean, including its support for Libyan warlord Khalifa Haftar and favoring Greece’s expansive maritime claims.

Turkey expects France to act in line with reason and law in the region, he added.

Turning to Turkey’s activities in Libya, Akar said: “Turkey is pursuing humanitarian and other activities in line with international law, and will continue doing so.”

Turkey’s only target is the terrorists, he added.

Turkey has launched several counter-terrorist military operations in recent years, especially against the YPG/PKK, which has tried to use northern Iraq and northern Syria as cross-border terrorist bases against Turkey.