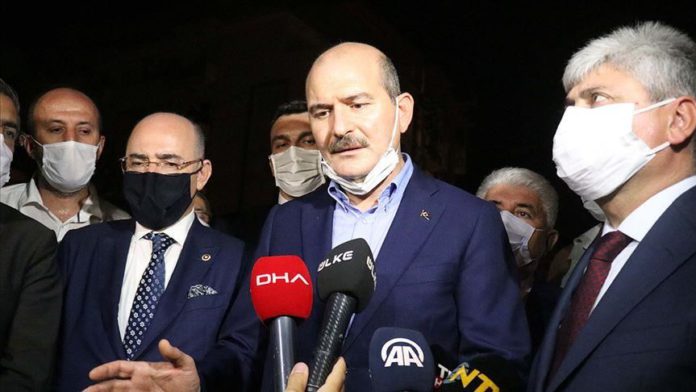 Two suspects have been detained over their links to a spate of forest fires in southern Turkey, the Turkish interior minister said Sunday.

An investigation into the cause of the fires continues, Suleyman Soylu told reporters in Belen District of Hatay province, the location of one of the fires.

A fire broke out in Belen on Friday and authorities believe it was a case of arson, Ibrahim Gul, the district’s mayor, told Anadolu Agency.

Soylu noted rumors suggesting the fire was set by a terrorist organization.

“We are continuing our investigation into this matter,” he said, adding the PKK terrorist group “has clear instructions on burning forests.”

On Saturday, an official said at least 10 people suffered minor injuries due to the fires in the province.

Twenty homes and five vehicles were also damaged, he added.

Bekir Pakdemirli, Turkey’s agriculture and forestry minister, said the fires in Hatay, which spread to three districts, have been brought under control.

There have been no casualties from the blazes.