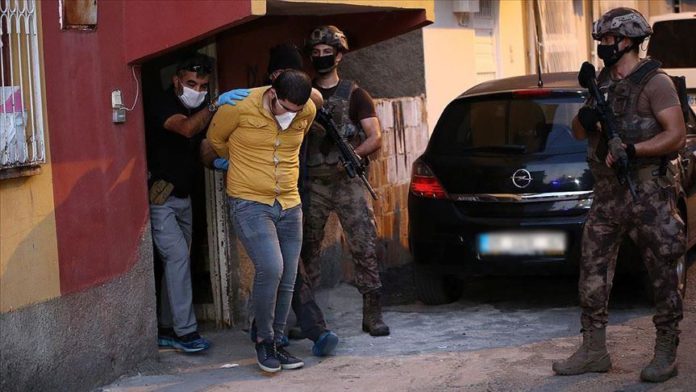 Thirteen suspects were arrested early Friday over their suspected links to the PKK/KCK terror group in southern Turkey, according to a security source.

Anti-terror teams in Adana province initiated efforts against the youth branch of the terror group, said the source on condition of anonymity.

The suspects allegedly carried out activities within the PKK/KCK’s youth branch, hiding behind the name of the Youth Assembly of the opposition Peoples’ Democratic Party (HDP), which the government accuses of having links to the YPG/PKK, the source added.

In this context, they allegedly sprayed slogans on walls in favor of the organization and its ringleader and set fire to a store by pouring oil on it.

Three hand grenades, two pump-action guns, a blank firing gun and 50 bullets and tools used in weapon production were seized during the operation as well as organizational documents.

In its more than 30-year terror campaign against Turkey, the PKK — listed as a terrorist organization by Turkey, the US, and European Union — has been responsible for the deaths of nearly 40,000 people, including women, children and infants. The YPG is its Syrian offshoot.