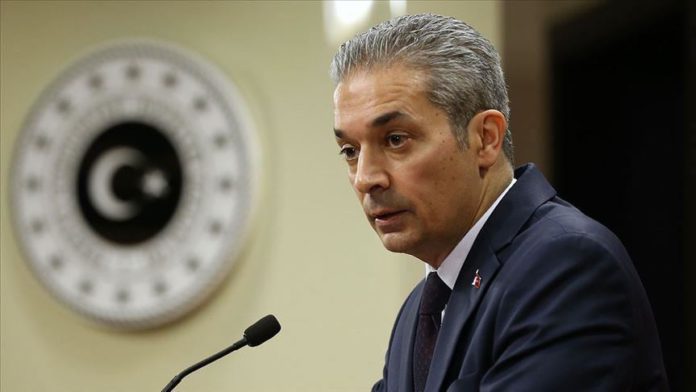 Turkey on Thursday denied claims that it kept on hold the Greek foreign minister’s plane in the air before it was entering Turkish airspace.

In a statement, the Turkish Foreign Ministry’s spokesman Hami Aksoy said: “The news alleging that the aircraft of Minister [Nikos] Dendias was kept on hold before entering Turkish airspace are intentionally misleading and are not accurate.”

“An overflight permission was requested in order to carry the Greek Foreign Minister Mr. Nikos Dendias to and from Iraq on 14 October 2020, and the Greek side was promptly informed that the said permission was granted.

“Upon the technical failure of the said aircraft in Iraq, the Greek side allocated a second aircraft for Mr. Dendias’s flight. Due to time constraint, Greek authorities were informed without delay that the aircraft in question was allowed to use our airspace with the same flight permit,” Aksoy added.

The ministry statement said the aircraft took off from Iraq without submitting the necessary flight plan, adding that flight plans transmitted through the Eurocontrol system.

“It was also confirmed from the system that the flight plan was not transmitted,” it added.

“When the aircraft carrying Minister Dendias arrived at our airspace, the plan was urgently requested from the Iraqi authorities, and after the plan was received, the flight was carried out safely.

“Naturally, it is not possible for an aircraft to fly without providing a flight plan. In this case, it is first and foremost a necessity for the safety of the Minister of Foreign Affairs of Greece. Our Greek counterparts were also informed about the issue,” the statement concluded.