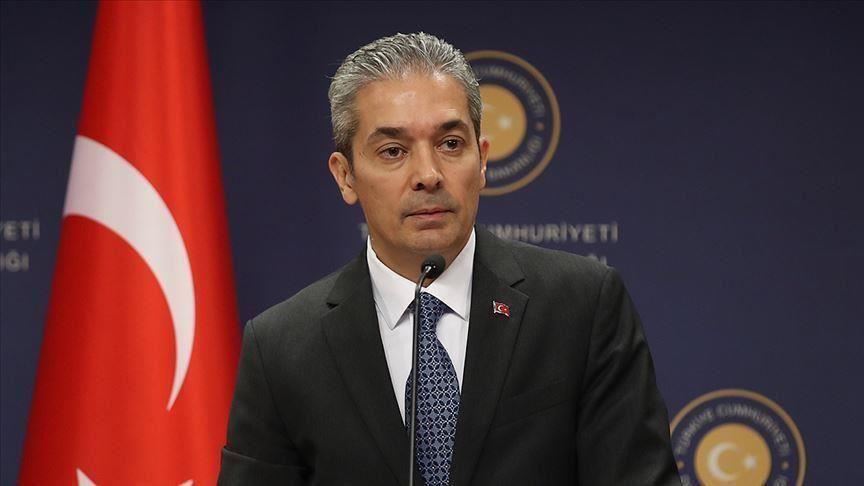 Turkey on Monday decried the illegal search of a Turkish-flagged ship carrying humanitarian supplies to Libya, a search carried out by a German frigate serving under a Greek-commanded EU naval mission.

“We regret the hours-long detention of the Turkish ship from its route under severe weather conditions and the fact that its crew was treated as criminals during the search,” said Foreign Ministry spokesman Hami Aksoy, denying that the ship has violated the UN arms embargo on Libya.

Aksoy stressed that Turkey protests the move, saying it was “carried out without authority and through use of force.”

He said the incident might incur a demand for compensation for damages or losses, adding: “It is essential to obtain the consent of the flag state in order to intervene in commercial ships in international waters. The United Nations Security Council (UNSC) resolutions on the Libyan arms embargo do not eliminate this obligation.”

The MV Roselina A cargo vessel was intercepted by the German ship Hamburg southwest of the Peloponnese islands to search its contents from Sunday evening to early Monday morning, Aksoy said.

The German frigate was involved in Operation Irini, a European mission launched earlier this year to enforce the UN arms embargo on the war-torn North African country of Libya, though it has been accused of bias in favor of warlord Khalifa Haftar and his allies.

Aksoy noted that the Turkish vessel was only carrying paint, paint materials, and humanitarian aid to Libya’s port of Misrata, and the captain of the ship cooperated with the frigate and provided detailed information to them.

However, the armed elements of Operation Irini conducted an hours-long search of the vessel, including forcibly searching the captain and crew, he added.

“All the crew members were brought together and detained, while the containers were being searched by force, with an armed soldier standing over the captain,” Aksoy said.

“The intervention was carried out with the consent of neither our country as the flag state nor the ship’s captain,” said Aksoy, adding that it only came to an end upon persistent objections by Turkey.

Aksoy said that the impartiality of Operation Irini is dubious as it was initiated without negotiations with either the legitimate Libyan government or Turkey or NATO, adding that the double standard and unlawful approach against ships going from Turkey to Libya “can never be accepted.”

“As we have stated many times before, Operation Irini is a biased operation. It is an operation that does not control arms support to the putschist Haftar, carries out arbitrary policies, and aims to punish the legitimate Libyan government,” he said.

A new government was founded in 2015 under a UN-led agreement, but efforts for a long-term political settlement have failed in the face of attacks by the warlord Haftar.

Turkey supports the country’s legitimate government, based in the capital Tripoli.