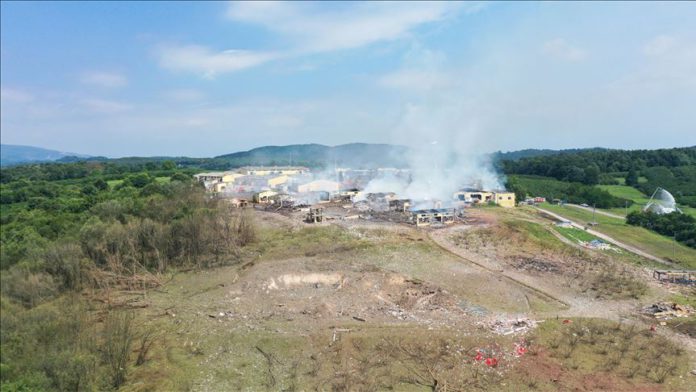 The death toll from fireworks factory blasts in northwestern Turkey rose to four, the country’s health minister said on Friday.

“A total of 97 patients were admitted to five hospitals,” Fahrettin Koca said, adding that 16 of them were discharged, while a 31-year-old patient was seriously wounded.

Koca wished Allah’s mercy upon people killed in the blast, conveyed his condolences to the families of the deceased, and wished early recovery to the injured.

He stressed that a total of 84 ambulances, two air ambulances, 18 medical rescue teams, and emergency aid personnel along with the disaster and emergency teams were dispatched to the scene in Sakarya province.

Health minister said he will remain at the place of the incident until he gets updates about the condition of all wounded people.

Koca also said that people living in the area might be affected from fireworks gases, especially in the first 12 hours after the incident. He asked locals to wear masks and to not leave their homes.

He also noted that a factory has some 186 employees, 20 of whom were not working on Friday, and another 15 to 20 people left the work earlier in the morning.

Referring to the incident, Turkish President Recep Tayyip Erdogan earlier said: “All kinds of measures are taken as of now.”

Erdogan said he hoped to hear better news from the scene and that people returned to their families in a healthy condition.

The blasts took place in the Hendek district of the province.