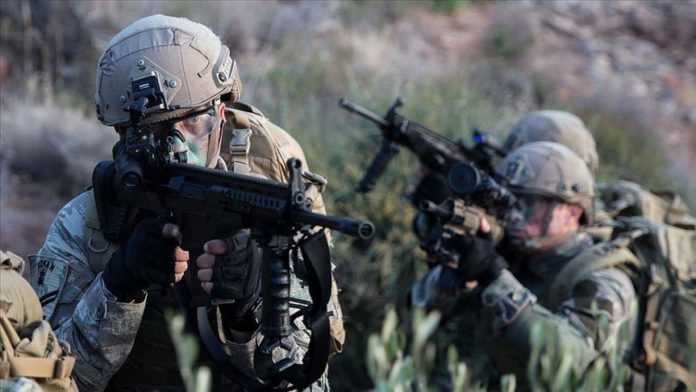 Turkish security forces “neutralized” a total of 303 YPG/PKK terrorists both in Turkey and abroad during the spring season, according to data compiled by Anadolu Agency.

The counter-terrorism operations were jointly carried out by the country’s National Intelligence Organization (MIT), Turkish Armed Forces, gendarmerie, and police forces in eastern and southeastern Turkey and abroad.

The anti-terror operations were carried out from March 1 to May 31. A total of 21 people were martyred, including nine security personnel, during the same period.

As many as 177 terror suspects were arrested in Turkish cities. Of them, 81 were remanded in custody.

On March 9, two terrorists — who have been affiliated with the terror group for over 20 years — were caught by gendarmerie forces in eastern Van province, bordering Iran.

The terrorists, known to be personal bodyguards of PKK’s ringleaders Murat Karayilan and Cemil Bayik, said in their testimony that panic grew among the organization as a result of Turkey’s anti-terror operations, and executions were performed within the terror group.

On the same day, Halide Tari, a senior terrorist who goes with the codename of Ayten Amed, was neutralized in the Qandil region of northern Iraq.

Tari joined the terror group in the 1990s, and was responsible for the coordination of PKK’s mobile forces.

On March 10, five senior terrorists were “neutralized” in the Qandil region following airstrikes conducted in collaboration with the air force and intelligence organization.

On March 11, Siya Munzur, codenamed Duygu Karayel, surrendered to security forces when she was persuaded by the gendarmerie forces in southeastern Mardin province.

On March 30, Nazife Bilen, member of the so-called top-level KCK leadership committee/executive council — which plays a decision-making role — was neutralized.

Meanwhile, the PKK’s so-called “Cemce group” was destroyed when seven terrorists, including four on Turkey’s wanted list, were neutralized during an operation in Kagizman in the eastern Kars province in the last two days of April.

On April 10, a senior wanted PKK terrorist was captured in police operations in eastern Turkey.

Mahmut Okay was apprehended when a suspicious vehicle was stopped in the Mus province, on the main road, as part of internal security operations, said an Interior Ministry statement.

On April 22, Resul Ozdemir, also known as Zibo, was brought to Turkey through the cooperation of MIT and Swedish authorities. He was a member of the PKK’s terrorist youth wing.

On April 29, Hafize Ozdemir, or Zin Avesta, a senior wanted terrorist, was found dead in a cave in the eastern Tunceli province. Her fellow terrorists left her to die by blocking her from receiving cancer treatment.

On May 1, a PKK terror suspect was arrested in connection with the 2011 car bomb attack in the capital Ankara, which claimed 5 lives, police said.

Identified only by the initials I.A., the suspect was captured from his father’s house in eastern Diyarbakir province, the provincial security directorate said in a statement.

In an operation in the eastern Agri province, wanted terrorist Ozer Ince, codenamed Piro Serhat, was “neutralized” by the Turkish Gendarmerie, the Interior Ministry said.

Ince, one of three terrorists neutralized in the operation, was on the Interior Ministry’s list with a bounty of 500,000 Turkish liras ($69,000).

On May 30, Turkish Interior Minister Suleyman Soylu said that five terrorists were neutralized in Herekol Mount in Turkey’s eastern Siirt province and the so-called headquarters of the terror group destroyed.

On May 31, Soylu said that three more terrorists, including a senior one, were neutralized.

In its more than 30-year terror campaign against Turkey, the PKK — listed as a terrorist organization by Turkey, the US and the European Union — has been responsible for the deaths of 40,000 people, including women, children, and infants. The YPG is the PKK’s Syrian offshoot.

Over 1,000 may have been killed in Iran protests: US