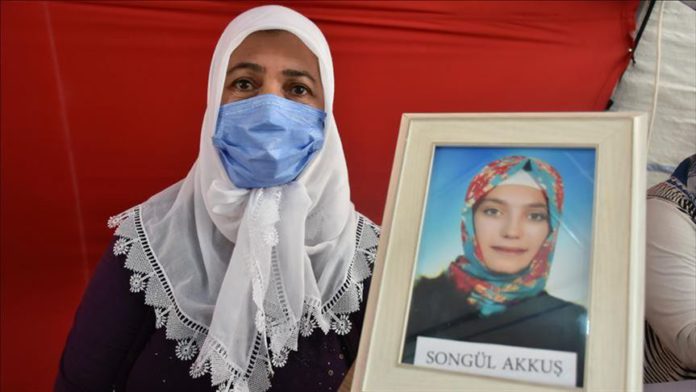 A sit-in protest by families seeking return of their children kidnapped by the YPG/PKK terror group entered its 400th day on Tuesday in Turkey.

One of the protesting mothers outside the Peoples’ Democratic Party (HDP) office in the southeastern Diyarbakir province, Fatma Akkus said her daughter Songul was abducted by YPG/PKK through the HDP, which the Turkish government accuses of having links to the YPG/PKK terror group.

Akkus also asserted that the HDP officials knew the whereabouts of her daughter and blamed the party for playing a role in forcible recruitment of her daughter by the terror group.

Sevket Bingol, whose son abducted in Istanbul six years ago when he was only 14, also accused the HDP of taking part in the abduction of children by YPG/PKK. He also underlined that sit-in protests are voluntarily organized and have continued without encouraged by any person or group.

The protest began on Sept. 3 last year in Diyarbakir, when Fevziye Cetinkaya, Remziye Akkoyun, and Aysegul Bicer said their children had been forcibly recruited by YPG/PKK terrorists.

The sit-in protest has been growing every day. The grieving families have vowed to continue the protest until every family is reunited with their children.