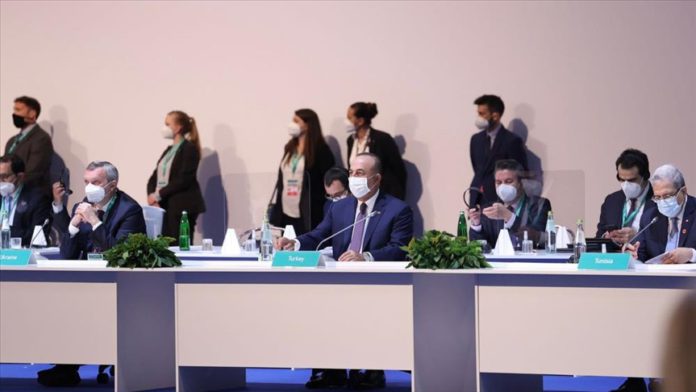 Turkey’s foreign minister on Monday slammed any use of one terror group to fight another, singling out the terrorist YPG/PKK in northern Syria, near Turkey’s border.

Ankara has often criticized its NATO ally the US for supporting the terrorist YPG/PKK to fight Daesh/ISIS, calling such support immoral as well as senseless. Turkey has also worked to block the YPG/PKK’s efforts to form a “terrorist corridor” near its southern borders.

Cavusoglu added that at the meeting the allies “shared our views on an effective fight against Daesh/ISIS.”

Hosted by Italy, the anti-Daesh/ISIS Global Coalition meeting, attended at the ministerial level by more than half of the 83-member coalition, is being co-chaired by the US.

Attending another ministerial meeting on neighboring Syria, Cavusoglu called the current situation there unsustainable, stressing that efforts for a political solution need to be revived.

Along with Cavusoglu and Italy’s Foreign Minister Luigi Di Maio, attendees in Rome include US Secretary of State Antony Blinken and NATO Secretary-General Jens Stoltenberg.

The meeting, the coalition’s first face-to-face event since the outbreak of the COVID-19 pandemic, aims to confirm that its members are on the same page on the absolute defeat of Daesh/ISIS, as well as their commitment to stabilizing the liberated areas of Syria and Iraq and consolidating cooperation among its working groups.

The meeting, at Italy’s request, will also discuss the threat posed by terrorist groups affiliated with Daesh/ISIS in the Sahel south of the Sahara Desert and various other regions of Africa.

Turkey collects over 4,200 cubic meters of mucilage from sea in...

Pakistan lashes out at Saudi-led OIC silence on Kashmir