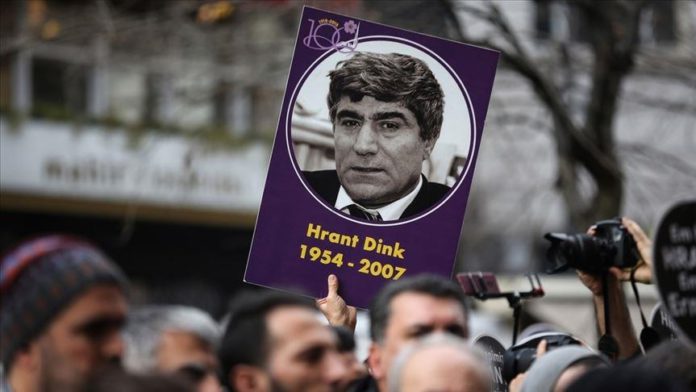 An Istanbul court on Wednesday ordered that two former intelligence officers be remanded in custody over the 2007 killing of a prominent Armenian-Turkish journalist, according to a judicial source.

Heavy Penal Court no.14 in Istanbul issued interlocutory order and found Volkan Sahin and Veysal Sahin guilty of knowing the murder of Hrant Dink beforehand, said the source on condition of anonymity due to restrictions on speaking to the media.

Citing evidence against the two, the court ordered that arrest warrants be issued to nab Volkan Sahin and Veysal Sahin as “they spent short time under detention,” the source added.

Dink, then editor-in-chief of the Armenian-Turkish newspaper Agos, was killed outside his office on Jan. 19, 2007.

The judicial control order for Ali Oz, former gendarmerie command, and Ecevit Emir were lifted by the court, while they are still banned from leaving the country.

Emre Cingoz, another defendant in the case, was banned to leave Istanbul, while his judicial control was released and his ban on leaving the country continues.

The next hearing of the case will be held on Jan. 8.