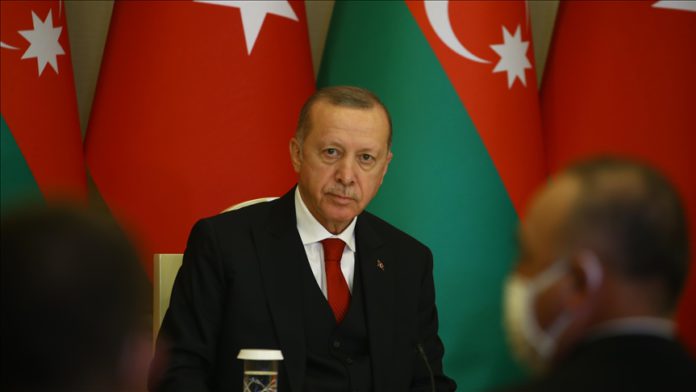 Turkey’s President Recep Tayyip Erdogan said on Thursday his country could open its borders to Armenia, if Yerevan takes steps toward regional peace.

Speaking at a joint news conference with his Azerbaijani counterpart Ilham Aliyev in Baku, Erdogan said they had no issues with Armenian people.

“We have no grudge against the people of Armenia. The problem is with the Armenian administration. Over 100,000 Armenians live in my country,” he said.

He praised Russia’s role in ending the weeks-long border clashes between Azerbaijan and Armenia earlier this year.

He touched upon the French National Assembly’s resolution recognizing Nagorono-Karabakh as a seprate republic.

“Even [Armenian Prime Minister Nikol] Pashinyan doesn’t accept it,” he said, adding that French President Emmanuel Macron has “not learned politics yet.”

He went on to say that the Azerbaijani administration will unleash an era of progress in Karabakh within three to five years.

For his part, Aliyev thanked Turkey for the support during clashes with Armenia.

“President Erdogan’s Turkey sets the example of courage, independence and development for the world,” Aliyev said.

Offering an olive branch to Armenia, he said they are ready to start fresh cooperation with Yerevan for the sake of lasting peace in the region.

When new clashes erupted in late September, Azerbaijan liberated several cities and nearly 300 settlements and villages from the Armenian occupation.