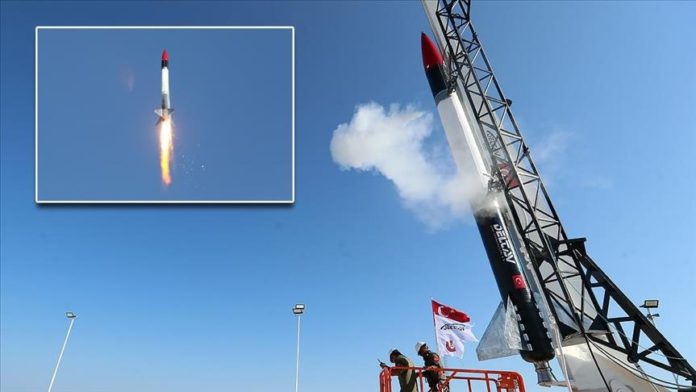 As the world marks the 52nd anniversary of mankind’s primal walk on a celestial body other than planet earth, Turkey continues to work to make its first contact with the moon.

Turkey aims to reach the moon with spacecraft that will be manufactured domestically and an indigenously produced hybrid engine, said an expert from the Turkish Space Agency, or TUA.

“Going to the moon is a symbolic goal. In this way, we will bring a space history to our country. At the same time, by increasing our space activities, we will gain experiences such as technology transfer and integration,” Prof. Dr. Ibrahim Kucuk, the head of TUA’s Space Sciences Department, told Anadolu Agency in an interview.

Turkey, on the 100th anniversary of foundation of the republic, plans to send an unmanned spacecraft to the moon in 2023 as part of country’s National Space Program.

Kucuk went on to say that the installation works of the ground tracking station for the moon mission has begun, adding that an antenna system with a diameter of 20 meters (66 feet), which was also designed to be used for scientific purposes as a radio telescope, will be installed.

He added that the agency is in close contact with countries which have experience in the field of space, especially the countries in the Asian region, adding that TUA has signed agreements with Kazakhstan, Ukraine, Hungary, Azerbaijan and Pakistan.

As it was indicated in TUA’s website, the cooperation activities have been conducted with 20 states and seven international organizations.

As the 52nd anniversary of the first walk on the moon is being marked, mankind owes one of the most significant breakthroughs in its history to the Cold War.

The 20th century’s Cold War space race between Soviet Union and the US began with the launch of Sputnik 1, the first artificial satellite, by Soviet Union on Oct. 4, 1957.

With the launch of Sputnik 1, there was a fear that Russian domination will engulf the world, Dr. Cenk Kayhan from Kayseri Erciyes University’s Astronomy and Space Sciences Department told Anadolu Agency.

Kayhan said that after the successive Sputnik rockets, which were sent into space, and Russian Cosmonaut Yuri Gagarin’s journey into outer space in 1961 appalled the Americans, adding that under those circumstances, then-US President US John F. Kennedy felt the need to launch a grand space program.

“For Kennedy, sending human, vehicle into space, or landing a vehicle on the moon made no sense anymore. America had to set itself a bigger goal, which was called the Apollo program: the moon landing mission,” he said.

Kayhan underlined that US was far behind Soviets when Apollo project was launched, and Americans could not even determine where spacecraft would land on the moon because the resolution of the telescopes in US was not sufficient, and even a vehicle should be built to map the moon.

As result of the intense works to accomplish the moon mission, Neil Armstrong and Buzz Aldrin became the first people who landed on the moon on July 20, 1969.

As then-President of Turkey Cevdet Sunay said in his goodwill message: “Since the start of the space explorations, the Turkish nation has most ardently wished the realization of this thousand-year old dream and followed with great hope and excitement every Success in this field.”

About Turkey’s goal of first rough landing on the moon in 2023, Ahmet Dervisoglu, head of Astrophysics Department at Erciyes University in Kayseri, told Anadolu Agency that technically, Turkey wants to design an engine that could go up to the surface of the moon after getting out of the atmosphere.

“Such space flights bring together a vast array of knowledge in a coordinated manner,” Dervisoglu said.

He went onto say: “Turkey does not want to miss this opportunity. To my understanding, Turkey is looking for a project that will bring together the engineering and science fields that it has been trying to support for a long time.”

“And as a result of Turkey’s National Space Program, Turkey tries to be prepared to enter a sector that has a very large profit share for itself,” he added.

Underlining the importance of Turkey’s inclusion in organizations such as Asia-Pacific Space Cooperation Organization (APSCO), Dervisoglu stated that collective works could be carried out with countries such as Indonesia and Pakistan, each of which has experience in different fields.

Turkey, in 2006, has been included in The Asia-Pacific Space Cooperation Organization (APSCO), which follows developments in space technologies, and provides a forum for knowledge-sharing.