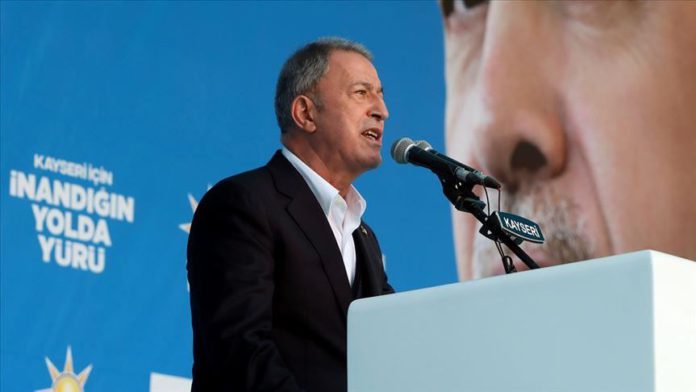 “We continue the controls and preparations of the system as planned,” Hulusi Akar said, addressing a meeting of the ruling Justice and Development (AK) Party in the central province of Kayseri.

“This system’s supply, testing, and controls do not mean Turkey is distancing from NATO,” Akar added.

“We will use the S-400 in the same way as the S-300 system is used within the NATO alliance,” he said, referring to other countries in the alliance which use the Russian S-300 defense system.

Turkey holds that the S-400 would not be integrated into any NATO systems and would not pose any risk to the alliance.

On Friday, the US Department of Defense said it is “aware” of reports that Turkey recently tested an advanced Russian air defense system, saying if the reports are true it “strongly condemns the test.”

“We have been clear: an operational S-400 system is not consistent with Turkey’s commitments as a US and NATO Ally,” spokesman Jonathan Hoffman said in a statement, calling the system “a barrier to progress elsewhere in the bilateral relationship.”

On rising tension between Azerbaijan and Armenia, Akar said: ”The international community and institutions should now understand that lasting peace and stability will be achieved by the withdrawal of Armenia from occupied Azerbaijani territories.”

Since recent clashes erupted on Sept. 27, Armenia has repeatedly attacked Azerbaijani civilians and forces, even violating two humanitarian cease-fires in the past two weeks.

The latest humanitarian truce in Upper Karabakh, or Nagorno-Karabakh, an internationally recognized territory of Azerbaijan, came into force last Saturday.