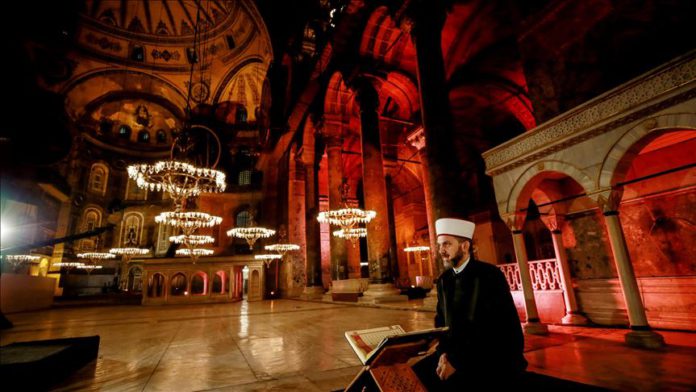 The conquest of Istanbul was celebrated Friday, 567 years after Fatih Sultan Mehmet gained victory in Istanbul, with a special program in Hagia Sophia.

The Ministry of Culture and Tourism organized “Conquest Feast in Hagia Sophia” in coordination with Turkish Presidency Directorate of Communications as part of celebrations throughout the day.

The program began with images taken by a drone of routes Fatih Sultan Mehmet navigated and arrived at Hagia Sophia by carrying ships on land while conquering Istanbul.

The program was followed with the recitation of the 48th chapter of the Quran, surah Al-Fath, with Turkish President Recep Tayyip Erdogan viewing via video.

Erdogan expressed gratitude to all those who did not abandon Hagia Sophia, the heirloom of the conquest.

He stressed it was important to remember the 567th anniversary with prayers and surah Al-Fatḥ.

Erdogan said he had dedicated his life to his beloved Istanbul and noted that if the city was somehow removed from Earth, world history would have to be rewritten.

A presentation with the theme of the conquest of Istanbul was performed on a platform in front of the museum.

The Conquest Feast ended with a firework display from the Historic Peninsula.

Programs were broadcast on social media accounts, television channels and the YouTube channels of the Presidency and Directorate of Communications.

Virus vaccine should be for all of humanity: Erdogan

Turkey: Schools to reopen at August-end