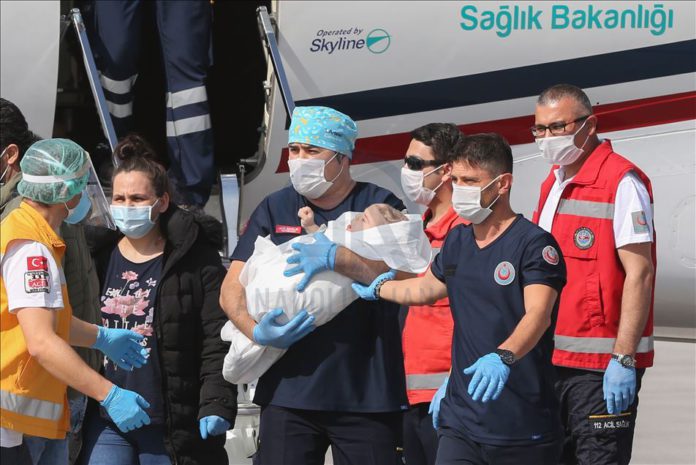 Turkish conjoined twin brothers Yigit and Derman on Wednesday arrived in Turkey after more than six months of medical operations and healing in the British capital London to separate them.

The two-year-old twins, who were born with their heads joined to each other, were taken back in an ambulance plane sent by the Turkish Health Ministry.

Yigit and Derman, sons of Turkish couple Fatma and Omer Evrensel, were sent to London’s Great Ormond Street Hospital for the rare operation thanks to the support from President Recep Tayyip Erdogan and First Lady Emine Erdogan last December.

Upon arrival, Omer Evrensel told reporters that he was happy to be back in Turkey with the twins after a successful medical operation and treatment.

“Our babies have no problems. There is no problem in their eating and drinking, everything is normal,” he said.

Fatma Evrensel also expressed her happiness that her twins recovered and were in good health.

The operation was performed by Noor Ul Owase Jeelani, a pediatric neurosurgeon of Kashmiri background and craniofacial surgeon David Dunaway in one of Britain’s largest children’s hospitals.

Yigit and Derman were born on June 21, 2018 and will celebrate their second birthday later this month.