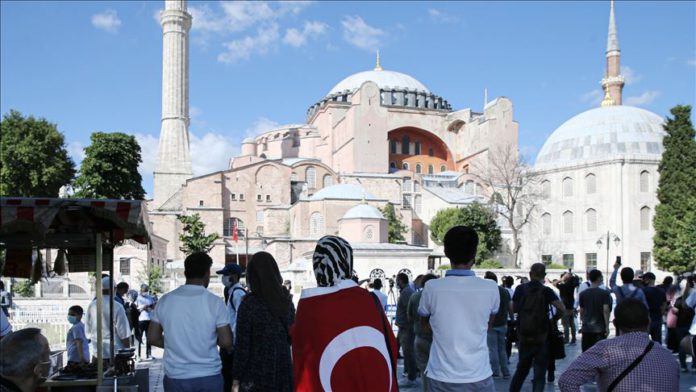 Hours after a landmark court ruling Friday, the Turkish government confirmed that Istanbul’s Hagia Sophia will be reopened for worship after an 85-year hiatus.

The nearly 1,500-year-old architectural gem will be transferred to the state Religious Affairs Directorate under a presidential decree, according to a Friday announcement in the Official Gazette.

Earlier Friday, ruling on a petition filed by an Istanbul NGO, Turkey’s Council of State overturned a 1934 Cabinet decree that had turned Hagia Sophia into a museum.

The court ruled that Hagia Sophia was owned by a foundation established by Sultan Mehmet II, also known as Mehmet the Conqueror, and was presented to the community as a mosque. According to the ruling, Hagia Sophia was defined as a “mosque,” a status that cannot be legally changed.

After centuries of use as a church under the Byzantine Empire, in 1453 Hagia Sophia was converted into a mosque by Mehmet II following his conquest of Istanbul.

In 1935, Hagia Sophia was turned into a museum.

Posting his decree on social media today, President Recep Tayyip Erdogan expressed best wishes for the change, which he has long advocated.

While details of the change are not yet known, Turkish officials have pointed out that many famed houses of worship, such as Paris’ Notre Dame and Istanbul’s Blue Mosque, are also open to visitors.

Turkey is home to people of many faiths who can freely exercise their religions, he added.