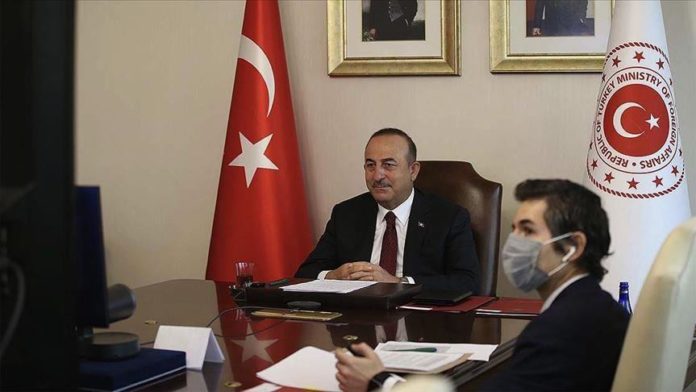 Turkey condemns the killings of innocent people in France and Austria in “barbaric terrorist attacks”, and also expects from other nations the “same empathy” over the killings of thousands of people by PKK terrorists, Turkish foreign minister said Wednesday.

Speaking on the latest incidents via video link at the 130th Committee of Ministers of Council of Europe, Mevlut Cavusoglu said “terrorism has no religion, race or any identity.”

Quoting the late French President Jacques Chirac 2006 speech, Cavusoglu said: “The freedom of speech should be exercised in a spirit of responsibility.”

Insisting on the opposite, like projecting “unfortunate images” on public buildings in France and attempts to burn Muslim holy book Quran “will further deepen divisions within our societies and feed radicalism,” said Cavusoglu.

“We have to rediscover the culture of living together in Europe. And the Council of Europe should take the lead,” he added.

The top Turkish diplomat also welcomed the appointment of the Council of Europe’s Special Representative to combat anti-Semitic and anti-Muslim hate crimes.

“We hope that this, along with the valuable efforts of ECRI [European Commission against Racism and Intolerance], will help reverse the trend,” he added.

Cavusoglu said the abuse of the European Court of Human Rights (ECHR) for political purposes constitutes a fundamental challenge for the European Convention on Human Rights, adding political motives should not substitute legal criteria and a high “ethical threshold” should be kept at the Court.

“I call on you to speak up for Azerbaijan’s territorial integrity without any ifs or buts. There can be no double standards,” said Cavusoglu.

“Just as we advocate the territorial integrity and sovereignty of Georgia and Ukraine, we should defend the rights of Azerbaijan,” he added.

Cavusoglu said Azerbaijan’s activities are in line with the resolutions of the United Nations Security Council, OSCE and the Parliamentary Assembly of the Council of Europe (PACE), recalling Resolution 1416 of PACE adopted in 2005.

“Armenia should end its occupation and be held accountable for deliberate attacks on civilians and continuously violating ceasefire agreements,” he added.

Cavusoglu also thanked Greek Chairmanship and conveyed condolences over loss of lives in the Friday’s earthquake that hit both Greece and Turkey.

“The earthquake came as another bitter reminder of how vulnerable we are and how we need each other,” he said.

“The COVID-19 pandemic also, as another stress test, revealed our weaknesses,” he added.

Trump: Senior scientist should no longer work for gov't