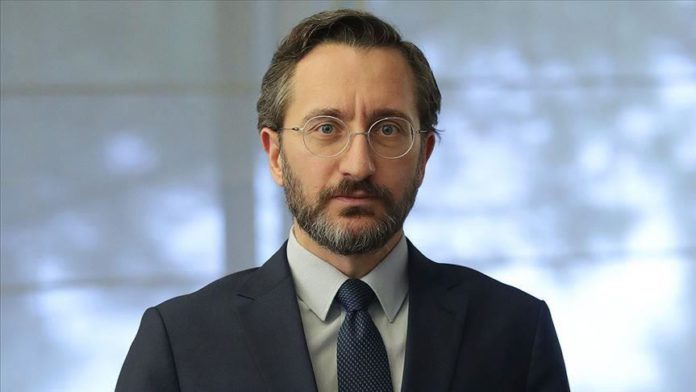 The removal of Turkish aid agency’s plaque at the Yusufiye Cemetery in Jerusalem by Israeli police shows the anger towards Turkish flag, the Turkish communications director said on Wednesday.

“The removal of TIKA’s plaque at the Yusufiye Cemetery by Israeli police in Jerusalem is a manifestation of deep anger at our crescent-star flag, a refuge for oppressed around the world. The reason for this hate is quite well-known,” Fahrettin Altun said.

Earlier, Israeli authorities had destroyed the plaque placed by the Turkish Cooperation and Development Agency with a Turkish flag on it.

The plaque was placed on the Yusufiye Cemetery, which belongs to Muslims, after a restoration project at a cemetery in East Jerusalem to mark Turkey’s contribution to the site.

Last month, Israeli Prime Minister Benjamin Netanyahu announced that his government would formally annex the Jordan Valley and all settlement blocs in the West Bank.

Palestinian officials have threatened to abolish bilateral agreements with Israel if it goes ahead with the annexation plan, which would further undermine the two-state solution.

The annexation plan came as part of US President Donald Trump’s “Deal of the Century,” which was announced on Jan. 28. It refers to Jerusalem as “Israel’s undivided capital” and recognizes Israeli sovereignty over large parts of the West Bank.