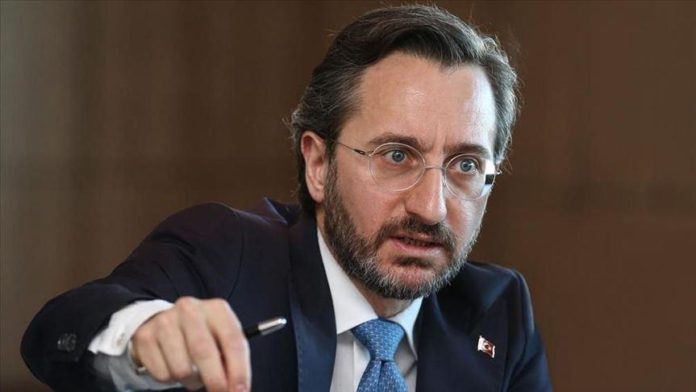 Turkey’s communications director on Saturday condemned Iranian authorities over unfair accusations against the Turkish president after he had read a poem during a ceremony in Azerbaijan.

Fahrettin Altun condemned aggressive statements made against President Recep Tayyip Erdogan and Turkey on the pretext of a poem deliberately taken out of context.

Reminding that Erdogan had read a poem by Azerbaijani poet Bakhtiyar Vahabzadeh at the Victory Parade in Baku after the liberation of the Azerbaijani territories, Altun added that it was an attempt to produce an artificial tension through a poem and that Iran’s name was not even mentioned in the poem.

He said the poem emotionally reflects on the feelings of people who were victims of the Armenian occupation of the Azerbaijani lands.

He said their reaction towards the unjust accusations made by the Iranian authorities and their expectation of a sensitive approach was brought to the attention of the Iranian ambassador to Ankara, who was summoned to the Turkish Foreign Ministry on Friday.

Altun said at a time when peace, stability, and security of the region impose great responsibilities on the two countries, it is extremely important to carefully avoid all kinds of attitudes and discourses that may overshadow the bilateral relations.

“We advise the Iranian authorities to get rid of this delusional mood as soon as possible and to take advantage of our common historical past and strong ties between our peoples to create a positive agenda, and not hostility,” he said.

He said these politicians have lost their way and are confused about Iran’s enemies, since the Turkish president has always regarded Iran as a friendly and brotherly country.

Celik reminded that only Erdogan raised his voice against sanctions on Iran while everybody else remained silent.

“Our president has always opposed injustices against brotherly Iran. Iranian politicians who overstep should be respectful when talking about our president,” Celik said.

Earlier Friday Iran summoned Turkey’s ambassador to the country over a poem Erdogan read out during a ceremony in Azerbaijan.