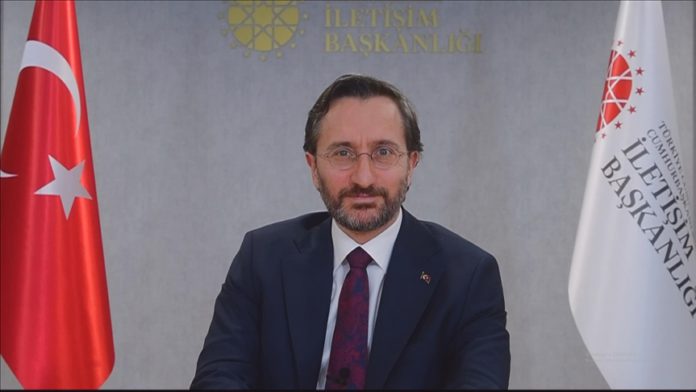 The Turkish communications director on Thursday shared a video on Twitter over recent developments regarding ongoing protests at Bogazici University in Istanbul.

Fahrettin Altun said Turkey would take essential precautions to protect its young people and universities from radicalization, terrorism and vandalism.

“Let us stop pretending that this is about freedom of expression and the right of peaceful protests,” Altun said, adding the university’s rector was appointed by the president in line with his constitutional mandate.

“A small and radicalized group” surrounded the rectorate building and attempted to invade it, he said.

“The police were consequently asked to step in and several people were detained for breaking the law. The criminal offenses include depriving an individual of their physical freedom and damaging public property.”

The communications director went on saying that no country in the world would turn a blind eye to the threats on public officials lawfully appointed.

“Unfortunately, radicalization has been a persistent problem on college campuses in Turkey. In recent years, radicalized students from the same university joined terrorist organizations like PKK/YPG,” he added. “We must shed light on the darkness that turns some of our nations’ brightest students into terrorists.”

Altun also said they “condemn the ongoing attempt to smear Bogazici University’s reputation by falsely portraying the radical views of a small group as the position of an entire community.”

The Turkish official concluded his remarks by greeting the vast majority of the university’s students for distancing themselves from the radicalized ones.