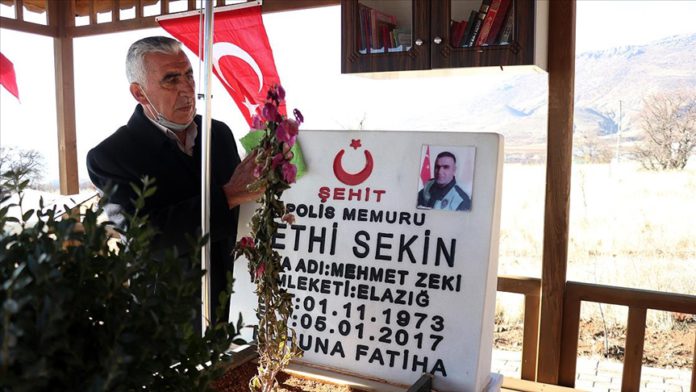 Turkey on Tuesday commemorated the fourth anniversary of the martyring of police officer Fethi Sekin, who intercepted a vehicle carrying explosives in Turkey’s third-largest city, in so doing preventing many more deaths.

Hikmet Kurum, Sekin’s uncle, told Anadolu Agency that his nephew had foiled the evil game of the terrorist group PKK, which planned the attack.

Stressing that Sekin is a source of pride for his family and all of Turkey, Kurum added:

“His martyrdom is the greatest sign of this country’s unity with its Turkish, Kurdish, Alevi, Sunni, Laz, and Circassian peoples. He showed the world that no one will be able to divide and separate this country.”

The PKK terrorist attack took place on Jan. 5, 2017, just outside the main courthouse in the Aegean city of Izmir, when Sekin, 43, stopped a suspicious vehicle, which turned out to be carrying explosives.

Realizing he had intercepted a terrorist plot, Sekin opened fire on the terrorists, triggering a firefight between the terrorists and security forces, preventing many deaths among members of the public.

The clash and a car bomb attack left Sekin and court official Musa Can martyred and nine others injured.